David A.J. Richards reflects on the trauma patriarchal initiation inflicts on boys and men, and how a feminism that unites men and women is the key to overcoming it 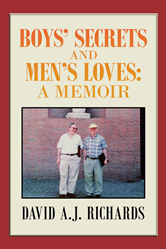 It is time now for American men across the gender spectrum to come forward and insist that patriarchy is not a marginal ‘feminist’ issue of interest only to women . . . This book is written in part as a call to men to wake up.

In his transition from boyhood to manhood, David A.J. Richards experienced a shift in behavior and emotional expression. Unconsciously, he began to pick up on societal clues that informed him which behaviors and interests were acceptable for men and which were not, repressing the unfavorable qualities including his homosexuality. In “Boys’ Secrets and Men’s Loves: A Memoir,” Richards refers to this process as patriarchal initiation, exposing the trauma it inflicts on all boys and men.

In “Boys’ Secrets and Men’s Loves,” Richards presents a case for how the patriarchy harms boys and men. As boys are pressured forgo their authentic, emotional selves in order to conform to the rigid stereotypes of masculinity, they are robbed of their individuality and ability to love freely and openly. They also learn that existing outside of the strict boundaries of manhood is shameful, developing a deep-seated need to defend and uphold such boundaries in themselves and others. This creates a lasting trauma as they must repress and isolate innate parts of their humanity into secret selves.

“What I have come to believe is that what men, gay and straight, share is the trauma the dominant patriarchal conception of manhood inflicts on men, which explains why, for men, it is so difficult even to speak, let alone remember, the pressures on them to conform,” wrote Richards.

Richard also explains how patriarchal initiation can be tied to the various social ills that threaten the stability of American democracy, including unjust wars, racism, anti-Semitism, sexism, homophobia and mass incarceration. Only through recognizing and resisting the gender hierarchy and embracing a feminism that joins men and women in resisting the harm patriarchy inflicts on all genders can men begin to heal from this trauma and nurture a society based on freedom and equality.

“It is time now for American men across the gender spectrum to come forward and insist that patriarchy is not a marginal ‘feminist’ issue of interest only to women and perhaps gay men but to all men, who are, I have come to think, patriarchy’s most damaged victims and yet, paradoxically, remain among its advocates and enablers. ” wrote Richards. “This book is written in part as a call to men to wake up.”

A poignant, timely memoir that sheds light on the trauma patriarchy inflicts on men, “Boys’ Secrets and Men’s Loves” offers a unique perspective on why men and women should unite in resisting toxic notions of manhood to restore a healthy democracy.

About the author
David A.J. Richards is an Edwin D. Webb Professor of Law at New York University, where he has taught Constitutional Law and Criminal Law for 45 years. He also founded NYU’s Program for the Study of Law, Philosophy, and Social Theory. He has authored over 20 books on moral philosophy and the basic rights of American constitutionalism, including two books with Carol Gilligan “The Deepening Darkness: Patriarchy, Resistance, and Democracy’s Future” and “Darkness Now Visible: Patriarchy’s Resurgence and Feminist Resistance,” and his work was cited by the Supreme Court of India in their landmark decision to overturn criminalization of same-sex relationships. To learn more, visit davidajrichards-author.com.