Oaklins DeSilva+Phillips’ client, Workman Publishing, one of the largest and most respected independently owned book publishers in the US, and Hachette Book Group announced today that Hachette has completed their acquisition of Workman. 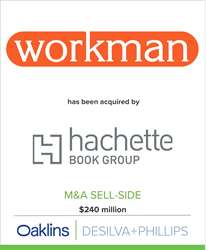 Oaklins DeSilva+Phillips’ client, Workman Publishing, one of the largest and most respected independently owned book publishers in the US, and Hachette Book Group announced today that Hachette has completed their acquisition of Workman for $240 million. The transaction closed after successful completion of the regulatory approval process.

Michael Pietsch, CEO of Hachette Book Group, said, “This is a significant and exciting milestone for Hachette Book Group, as we welcome an extraordinary publisher to HBG. We have deep admiration for Workman’s publishing, its people, its authors and illustrators, its books, its commitment to backlist and its culture. The opportunity for HBG to join forces with Workman is one I believe will be enormously beneficial to both companies, and our goal is to provide a new home that will enable Workman to continue to thrive and grow in exciting ways.”

Workman Publishing will be HBG’s eighth publishing group, comprising the imprints Workman, Algonquin, Algonquin Young Readers, Artisan, Storey Publishing, and Timber Press. The new group will be led by Dan Reynolds as Senior Vice President and Publisher. He will report to CEO Michael Pietsch and will join HBG’s Executive Management Board. Dan Reynolds said, “One glorious Workman era has ended today, and another, full of promise and opportunity, has begun. We are very excited to join the Hachette family of publishers and energized by the prospect of learning ways of working and finding new muscles to flex. But I also want to use this moment to thank Carolan Workman for her wise leadership before and during this transition. I speak for everyone at Workman in wishing her a retirement filled with the joys of life, including getting lost in a good book.”

Workman publishes award-winning content across many strong categories including cookbooks, parenting/pregnancy guides, gardening, country living, humor, children's books, gift books, fiction, audio, and a bestselling calendar line. Workman’s imprints are fixtures in the publishing industry with tremendous brand recognition and a track record of consistently finding, cultivating, and developing truly unique and remarkable titles. Workman has developed many of today’s best-known publishing franchises such as WHAT TO EXPECT®, BRAIN QUEST®, and Page-a-Day® calendars.

Robin Warner, Managing Director, Head of Oaklins DeSilva+Phillips' Book Publishing and Education sectors, said, "We have all seen remarkable deal activity in the last 18 months. However, nowhere have I seen such an unwavering commitment to preserving a company's amazing culture and looking after its staff, in addition to achieving a robust valuation. Our mandate was to find such a buyer and Hachette delivered on all these points. I am proud to have been part of the team that found the right match for Workman Publishing and am honored to have represented such a smart and ethical entrepreneur as Carolan Workman.”

"Representing Carolan Workman and the Workman Publishing team has been one of the greatest privileges of my career. The company, its people, its culture and all they have created over the past 54 years is truly exceptional and one of the most admired companies in publishing. From the beginning and throughout the process, Carolan's top priority was the security and well-being of her employees, as well as her authors, illustrators and culture. We are thrilled to have found a buyer that appreciates and will protect all that makes Workman so special," says Joanna Stone Herman, Partner at Oaklins DeSilva+Phillips.

Oaklins DeSilva+Phillips is a leading global mid-market investment bank in the Technology, Media & Telecommunications sector with over 30 professionals in New York and over 90 Oaklins TMT professionals across 45 countries. The firm began as a boutique Media & Technology bank in 1996, founded by Reed Phillips and Roland DeSilva. In 2015, the firm became part of Oaklins, one of the world's largest mid-market banks with over 70 offices and 850 professionals and 1700+ closed deals in the last five years. ODP combines deep TMT expertise with global perspective, providing personalized boutique-level service and senior-level attention to every client while leveraging the vast resources of Oaklins' global platform, staff and deal experience. For more information, visit dp.oaklins.com.