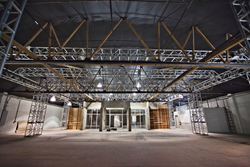 Hollywood-based Occidental Entertainment Group Holdings, Inc. has expanded its real estate facilities with the addition of two buildings in West Hollywood and Van Nuys approximating 40,000 square feet to support these operations. Additionally, Occidental Entertainment has expanded the footprint of its Studio Group operations at their Radford Studio complex with the addition of another one-acre property that includes 20,000 square feet of stage & office space, storage areas and extra parking. This facility has been the home to Crazy Ex-Girlfriend for the past four seasons, and was earlier home to Sons of Anarchy for its prior seven season run.

Ricky Stoutland, President of Occidental Entertainment’s Studio Group division, says “the Paladin inventory will further provide our clients with immediate access to assets for production to include film, video, and photographic studios, equipment rental houses, as well as, independent productions and photographers. With the Paladin assets, our combined lighting & grip inventory is now in the 8-figures with a wide range of equipment to serve any production.”

As stated by Brian Scane, president of The Paladin Group Inc., "We are delighted with the sale to Occidental Entertainment Group, which is an ideal successor to Paladin's Cine Rental operations. The Paladin Group will continue its stage management operations as well as the manufacturing of power distribution, lighting and grip equipment for the entertainment industry.

According to Craig Darian, CEO and Co-Chairman of Occidental Entertainment Group Holdings, “these acquisitions perfectly complement our existing portfolio of stages and support space giving us the ability to better serve our growing clientele. We’re committed to keeping production in Southern California, and we will continue to invest in our studio infrastructure and many office buildings to better support the needs to the production community.”