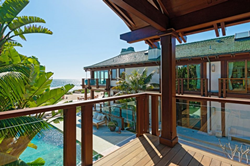 Pierce Brosnan’s Malibu beach home is for sale at $100 million.

“Rob Lowe's Breathtaking Montecito Mansion”
Rob and Sheryl Lowe have shown that patience is not only a virtue, but often a necessity in today’s high-end real estate market. Having listed their Montecito, California home in 2018 at $47 million and with only one price cut in 2019 to $43 million, it sold over the asking price at $45.5 million.

“The Weeknd's Mansion for the Weekends”
The Weeknd doesn’t have to wait until the weekend to kick back in his L.A. home with almost every imaginable amenity that can be found in today’s best mansions. He recently listed the home for $24.995 million, soon after he spent $21 million for a new penthouse in L.A.’s Beverly West condo building.

“Katy Perry Lists Beverly Hills Home”
A Beverly Hills home that Katy Perry bought in 2018 is for sale at $7.95 million. Katy has been using the 4,410-square-foot home for guests as it is near her main home.

“Pharrell Sells Ultra-Contemporary Home”
One of Southern California's most modern homes, Pharrell Williams has sold his ultra-contemporary home for $14 million. Pharrell bought the 10-bedroom, Beverly Hills home from Tyler Perry in 2018 for $15.6 million.

“John Lennon's 'Lost Weekend' New York Penthouse”
In the early 1970s while married to Yoko Ono, John Lennon lived in a New York City apartment with his personal assistant and lover May Pang; Lennon called it his “Lost Weekend.” The Manhattan penthouse where Lennon and Pang lived is now for sale at $5.5 million.

“John Legend & Chrissy Teigen's New Home”
John Legend and Chrissy Teigen have purchased a new Beverly Hills home for $17.95 million that is located a couple miles from their home they recently put on the market for $23.95 million. The 10,700-square-foot home includes seven bedrooms, ocean views and a chef's kitchen.

“Kathy Griffin’s A-List Bel Air Estate”
My Life on the D-List comedian Kathy Griffin is selling the guard-gated Bel Air Crest mansion she bought in 2016. It was also where she married husband Randy Bick on New Year’s 2020 that was officiated by friend and legendary comedian Lily Tomlin. Almost five years after moving in she has recently put it on the market priced at $15.9 million.

“J. Lo & A-Rod Sell Malibu Home Fast”
At the end of July, Jennifer Lopez and Alex Rodriguez listed one the homes from their extensive collection for $7.99 million. According to Jennifer at the time they bought the Malibu oceanfront home from Jeremy Piven, it was a “fixer-upper next to the water.” The home has already sold for $6.78 million.