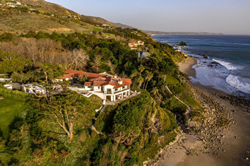 "Mariah Carey’s Sweet Georgia Home"
Mariah Carey has listed her Atlanta-area nine-bedroom home for $6.5 million. Located in Sandy Springs, the home has 12,575 square feet on four acres. Features include a pool and pool house, tennis court, nine bedrooms, and a recording booth. Mariah bought the home in 2021 for $5.65 million.

"Kim Kardashian Buys Cindy Crawford’s Malibu Mansion"
Kim Kardashian was born in LA and lived in a variety of homes in her 41 years, but she has stayed close to the city. Kim is now moving about an hour away to Malibu where she is buying Cindy Crawford’s former mansion. Kim paid $70.4 million for the 7,450-square-foot, cliffside home with breathtaking ocean and beach views.

"Lil Wayne’s Miami Beach Home Lists $29.5 Million"
Lil Wayne is one of the most influential hip-hop artists of his generation with 120 million record sales, five Grammy Awards, and 11 BET Awards. Almost as unique as the superstar rapper, Lil Wayne’s Miami Beach home with over 10,600 square feet and 110 feet of water frontage has just been listed for $29.5 million.

"Cher Lists Malibu Oceanfront Home $85 Million"
With a long track record of designing, restoring and selling homes from Hawaii to California, New York and Florida, Cher has listed her longtime Malibu home for $85 million. The home with about 13,200 square feet, seven bedrooms and ocean views from every room was built in 1999. Some of the home’s features include a driveway lined with 40 palm trees, courtyard with a Moorish-style fountain, tennis court, and an indoor-outdoor fitness area.

"Johnny Cash Home Sells Fast & Over Ask"
In 1961, Johnny Cash built a 4,500-square-foot home in rural Casitas Springs, California as his quiet place to escape from the rock 'n roll lifestyle. A place he and his wife, Vivian, and their three daughters could enjoy family life in the hills. Johnny Cash’s former home sold in just a few weeks to one of his fans for $1.795 million - $55,000 over the asking price.

"Frank Sinatra’s LA Contemporary Home"
One of Frank Sinatra’s former homes is for sale at $12.75 million. The mid-century style home in suburban LA has over 6,000 square feet and almost eight acres. Sinatra lived in the LA home in the 1950s and ‘60s. Frank owned a number of beautiful homes in his lifetime in New York, California and Nevada.

"Sugar Ray Relists Pacific Palisades Home"
The Pacific Palisades home built in 1993 for Sugar Ray Leonard and his wife, Bernadette, is back on the market at $45 million. The 16,773square-foot home with seven bedrooms and several wings was designed for entertainment from small intimate gatherings to full-blown fundraisers. The home was previously on the market at $52 million.