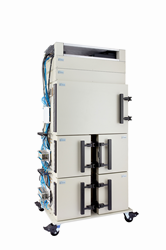 We are excited to support the highest per instrument radio vSTA capacity. Given the focus in high density networks with Wi-Fi 6, this is an important breakthrough that helps our customers test scenarios where performance is required with hundreds of connected devices.

octoScope®, the leader in accurate, repeatable and automated wireless personal testbeds, announces it has doubled the virtual station testing capacity in all of its testbeds.

New Wi-Fi 6 technology emphasizes usage scenarios with hundreds or thousands of devices connecting simultaneously in high density venues such as stadiums, factories, warehouses and office buildings. Similarly, in the home, applications such as Internet of Things (IoT) increases the number of Wi-Fi devices needing simultaneous connectivity.

A new generation of Wi-Fi test equipment is required to verify performance in usage scenarios with hundreds of devices per access point (AP). Scaling test systems to supporting hundreds of Wi-Fi radios has limits using conventional technologies as issues arise about the size, cost and heat dissipation of the test system. A useful alternative is to use virtual stations.

Each vSTA acts as an independent TCP/UDP/ICMP/IP traffic endpoint enabling testing on a mass scale with a variety of independent controllable traffic streams.

“We are excited to support the highest per instrument radio vSTA capacity. Given the focus in high density networks with Wi-Fi 6, this is an important breakthrough that helps our customers test scenarios where performance is required with hundreds of connected devices,” said Janne Linkola, octoScope’s Senior Director of Marketing.

About the octoBox personal wireless testbed

Stackable and configurable octoBox personal testbeds are completely isolated from external interference and can be used at an engineer’s office or lab bench.

Each octoBox testbed is controlled by a dedicated Node.js web server accessible via a browser UI for manual control, or via REST API for test automation. The server provides the time base for the testbed and controls the built-in instruments, DUT configuration, traffic, and test flow. Test results are saved in a MongoDB database, enabling multiple teams to easily collaborate by sharing the test automation scripts and test results.

octoScope is the market leader in isolated, repeatable and automated wireless personal testbeds. Our patented technology redefines the accuracy, stability, economics and value of over-the-air wireless testing. The octoBox testbed is configurable for automated regression test sequences with a range of airlink conditions and interference scenarios. The octoBox testbeds are scalable to support a single DUT or multi-node mesh systems under test.

The testbeds feature powerful technologies to evaluate the behavior and performance of a broad range of wireless devices and systems. The tested capabilities include protocol monitoring, test traffic generation, motion and multipath emulation, interference generation and device emulation.