Offshore, the Largest Rooftop Deck in the World, as Designated by The Guinness Book of World Records, Opens Atop Iconic Navy Pier

Boasting over 42,000 square feet of indoor and outdoor space, this spectacular year-round rooftop destination will elevate the Chicago skyline to another level, offering locals a truly unique perspective of The Windy City and Lake Michigan. 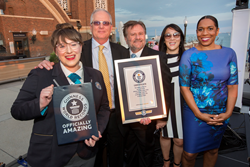 In it’s opening ceremony today, The Guinness Book of World’s Records has named Offshore, the much buzzed about and highly anticipated new deck sitting on the third floor of Navy Pier as the “World’s largest rooftop deck.” Offshore, a stunning, chic 42,000 sq. ft. all-seasons/all-weather venue will offer Chicagoans a full-service luminous bar and world-class kitchen, terraces, seven cozy fire pits, an entertainment and gaming area, and multiple large social gathering spaces. Offshore is expected to be one of the city’s and the country’s hottest destinations; a sexy and sophisticated space adjacent to Navy Pier’s Festival Hall at 1000 East Grand, offering panoramic, unmatched views of Lake Michigan and the city’s magnificent skyline.

Culinary direction for Offshore is led by Executive Chef Michael Shrader, a protégé of Jeremiah Tower who is credited as a pioneer in California cuisine. Michael also served as Executive Chef for The N9NE Group, and was the Founder and Executive Chef at Urban Union Chicago. At Offshore, he will focus on seasonal, modern American cuisine with global influences served as small, shareable plates. Special on-site catering menus will also be available. Clay Livingston, formerly Partner and General Manager of Red Herring Lounge and Kitchen in Louisville, will develop and curate the beverage program seasonally, with playful house made craft cocktails, wine, champagne, and strong local craft beer options to choose from. Signature, Instagrammable drinks include a lychee-style cocktail, a fruit-forward cocktail served in a bag, and much more.

As guests enter Offshore, they are greeted with a wall of cascading, colorful propellers that are flanked by two slate metal vintage series pool tables on either side. Floating globe lights dot the way through the corridor to the 16-foot-tall, 8,500 square foot indoor space. As guests continue in, they will be wowed by a sprawling 100 foot, 60-stool bar. Curvy, white finishes with brass and iron-like metals line the space, with deep blue and warm yellow accents throughout. The indoor area, available for private buy-outs of many sizes, features custom brass whistle-shaped light fixtures, captain chairs, and oversized “playpens” made of a mashup of geometric cushions specifically designed for socializing. A barrel-vaulted roof and an operable glass enclosure conceals the entire indoor space, and fully retracts allowing the lakeside breeze in, regardless of day or month. Guests are welcomed onto the Terrace with a selection of soft seating on the far Northeast corner of the Pier, providing them with a completely unique perspective of the city skyline not found anywhere else.

Architectural parasols run the length of the 20,000 square foot Terrace, along with communal tables lined with clusters of globe lighting positioned in netting floating overhead. The space also offers high top tables for patrons to mingle and enjoy a cocktail. Seven fire pits are spread throughout. A highlight of the deck is a 450 square-foot planter with lush greenery shaped like Chicago’s “Y” symbol, a nod to the Chicago river. On the Southeast end of the terrace, a stage for live entertainment overlooks the city’s skyline. Two private lawns with sail shade canopies will act as a destination for group gaming, social gatherings, bridal parties, weddings, and much more.

The hours of operation for Offshore are Monday-Thursday 4 p.m. to midnight, Friday from 4 p.m. to 2 a.m., Saturday from 11 a.m. to 2 a.m., and Sunday from 11 a.m. to midnight. Patrons must be 21 and over to enter Offshore. Offshore is easily accessible through the Pier, with ample valet service available. For more information, please visit http://www.drinkoffshore.com. For more information or to make a group reservation, please contact Director of Sales & Marketing Kathleen Jenkins at kathleen(at)drinkoffshore(dot)com.

Navy Pier
Located on Lake Michigan, Navy Pier is one of the top-attended nonprofit destinations in the Midwest, stretching more than six city blocks and welcoming nearly 9 million guests annually. Originally opened in 1916 as a shipping and recreation facility, this Chicago landmark showcases more than 50 acres of parks, restaurants, attractions, retail shops, sightseeing and dining cruise boats, exposition facilities and more. The Pier recently celebrated its 100th anniversary with the unveiling of the iconic Centennial Wheel, Polk Bros Park, Fifth Third Bank Family Pavilion and Peoples Energy Welcome Pavilion. In 2019, Navy Pier continues to usher in its second century with ongoing pier-wide redevelopment efforts – including a 220-room Hilton hotel with rooftop bar, a marina and more – in addition to free, year-round arts and cultural programming designed to inspire, educate and connect communities across the city and globe. Click here to donate to Navy Pier, a 501(c)(3) organization, in support of free public programs. For more information, visit http://www.navypier.org.

Navy Pier Mission Statement
Navy Pier is the People’s Pier, Chicago’s lakefront treasure, welcoming all and offering dynamic and eclectic experiences through partnerships and programs that inspire discovery and wonder.

ACRON Group
ACRON Group, a USA and Swiss based Real Estate Owner and Investment Manager, is developing and building the four-star hotel ‘The Sable at Navy Pier’ coupled with an exclusive rooftop bar called ‘OFFSHORE’. ‘OFFSHORE’ will be the largest rooftop bar and restaurant in the United States. According to Greg W. Wilson, President and CEO of ACRON Group’s USA operations, the Hotel along with what will quickly become Chicago’s best-known hotspot, ‘OFFSHORE’, will no doubt be one of the top destinations in Chicago. Further, Peer Bender, CEO of ACRON AG and responsible for ACRON Group’s operations in Europe, additionally noted that ACRON is particularly unique in that where other companies might see difficulties, we discover untapped potential. To the point, no one has ever built a Hotel and the like of the ‘Offshore’ Roof-Top venue before on the famous Navy Pier.

ACRON Group’s founder and Chairman of the Board of Directors, Klaus W. Bender said, ‘What has always set ACRON apart is that we do not go where all the others have already been. Accordingly, a pioneering top position is essential for us. The Sable at Navy Pier and OFFSHORE represents the quintessential project inspired by ACRON.’

ACRON Group was founded in 1981 and owns an exceptional and ever-growing group of luxury hospitality investments in Europe and the USA.

Maverick Hotels and Restaurants
Maverick Hotels and Restaurants: World-class operators and experts in their fields, the management team of Maverick will create value at every hotel and restaurant they manage by combining a pervasive sales-driven culture with a proven ability to capture market share and manage middle of the page expenses to drive margins. Successful proprietary tools and systems developed by the team allow the field to operate more efficiently, while a driven owner/entrepreneur mentality keeps a sharp focus on making smart decisions based on what is best for the asset.

Led by President Robert Habeeb, a 35-year hotel veteran, Maverick Hotels and Restaurants offers the expertise to position or reposition an asset through an incredibly talented team of seasoned professionals that head every discipline. Maverick’s unique culture and guiding principles offer a fresh new way of working with a hotel and restaurant management company, not as a traditional “contract party” but as a partner.