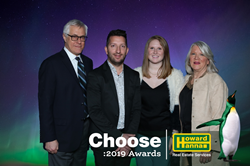 Overall, Cleveland and the surrounding area has seen a resurgence, but during the time I have been in the business, we have seen three recessions, a mortgage crisis and more. I firmly believe that through it all though, the value of a good community and the benefits of homeownership remain constant.

Cathy’s astounding success in that time has cemented her leadership position in the real estate industry and in her community. “So much has happened since I’ve been in the business,” said Cathy. “We’ve seen so many generations come and go and even though so much of the business is now online, it’s still very much a ‘people business.”

Regarding the market, she added, “Overall, Cleveland and the surrounding area has seen a resurgence, but during the time I have been in the business, we have seen three recessions, a mortgage crisis and more. I firmly believe that through it all though, the value of a good community and the benefits of homeownership remain constant.”

Cathy is ranked “The Very Best of the Best” as the top 1% of sales associates with Howard Hanna, and is the consistent recipient of the Howard Hanna Quality Service Award, with a record-breaking number of positive returns. Cathy has had a hand in over 2,500 transactions in her career and her team has sold a total of 1,071 homes since the recession ended in 2009. Over 700 of those houses in the past 10 years have been in Shaker Heights. “This is a testament to the unequalled commitment, service and knowledge we bring to this market, and that’s a real sign of success,” noted Cathy.

Cathy works alongside her husband, James, who got his license in 1996 and who, along with Cathy is a Shaker Heights expert. Regarding the current market, James noted, “Logically, the Shaker Heights market should have been adversely affected by the tax law passed in December of 2017, but the start of 2019 is showing the market to be very strong. There is surprisingly a lot of buyers and open house activity.”

Recently, the LeSueurs have taken to mentoring young agents. Despite the many opportunities afforded by real estate, it is very difficult for young people to break into this straight commison business. The LeSueurs found a way to make it work, however. Sean Szczepinski, 35, was working in advertising when he felt there may be more potential for him in real estate, but not enough starting income to make the jump. He joined the team in 2015 after getting his real estate license. He helps the team with marketing, while gradually picking up his own clients and making sales.

Steffany Armstrong, 27, joined the team in July 2018. She spent six months as a transaction coordinator and now, while still doing that, she is building her own base of clients. Mentoring young agents is yet another way Cathy demonstrates her leadership in the business.

Concluded client Holly M., “Cathy made it happen! Our house was on the market for well over a year. After I finally did my homework, we listed the house with Cathy and she had it sold in a few months. She managed everything and was delightful to work with. She is hands-on and is personally involved with every aspect of the sales process. She is also a pleasure to work with. If you want a Realtor who will be personally involved, take care of the details, and get your house sold in the shortest time frame Cathy is the only one to choose. We are eternally grateful.”

About Cathy LeSueur, Howard Hanna Real Estate Services
Cathy LeSueur, during her 36 years of successful experience, has entered the highly-esteemed ranks of "The Very Best of the Best" and the Top 1% of sales associates with Howard Hanna. Cathy was the top Shaker Heights office producer in 1994, 1996, and 1998-2017. The LeSueur team consistently receives the Quality Service Award for providing outstanding service to her customers and clients. For more information, please call (216) 355-7005, or visit cathylesueur.howardhanna.com.