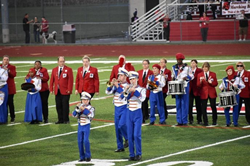 The Outback Bowl will be broadcast from Tampa, Fla. on New Year's Day at 1:00 P.M. Est on ESPN. Image Credit: Yolanda Johnson

'We are excited to host this group of talented young people as part of our halftime show and New Year’s Eve Parade.' -Jim McVay

The Ohio State School for the Blind Band is the only blind marching band in the world. It will also be the lead band in the Outback Bowl New Year’s Eve Parade in Tampa Tuesday night and will be part of a massed band performance at half time of the Outback Bowl game on January 1st in Raymond James Stadium.

The nationally recognized band is known for their ability to entertain and inspire. The members, in grades 7-12, come from all over the state of Ohio and are guided by community volunteers from various walks of life.

“We are excited to host this group of talented young people as part of our halftime show and New Year’s Eve Parade,” noted Outback Bowl President/CEO Jim McVay. “It is a great opportunity to showcase their abilities on a big stage.”

The band was formed in 2005 when now retired director Carol Agler added Marching Band to support the Ohio School for the Deaf Football program. OSSBMB performs their half-time drills at area high schools and in band festivals. They regularly march as the lead band in the Millersport Sweet Corn Festival Parade and the Circleville Pumpkin Show.

The band has been honored numerous times with resolutions from the Ohio Senate for advancing the rights of people with disabilities to participate in all aspects of the community.

The Outback Bowl celebrates its 34th game this year and will be played on January 1st at 1:00 PM ET in Raymond James Stadium. Tickets to the game are available through Ticketmaster at http://www.Ticketmaster.com. For additional information or special ticket packages, contact the Outback Bowl office at (813) 874-2695.

ABOUT THE OUTBACK BOWL:
The Outback Bowl attracts local fans and visitors from more than 40 states each year for the game and week of events while generating tens-of-millions of dollars in exposure for the region. The Bowl boasts the longest title sponsor in bowl game history, with Outback Steakhouse celebrating its 25th year with the game. The Bowl has contributed over $155 million to universities over its history and is estimated to have generated more than $1 billion in economic impact for the Tampa Bay area over this time. It has also contributed more than $1.5 million to area charities since 2016 and has committed to paying an additional $39 million to universities and donating at least $3 million more to charities through the 2026 game.