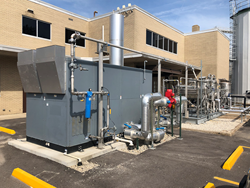 Anaerobic bacteria break down the volatile solids in the digester, releasing biogas, which is then combusted by the Flex Turbine to generate electricity.

As one of the first wastewater treatment facilities in the state to become energy-neutral, the Eastern Ohio Regional Wastewater Authority (EORWA) celebrated the grand opening of their recently upgraded Resource Recovery plant in Bellaire, Ohio with a ribbon cutting ceremony, hosted tours, and luncheon. The $5.3 million upgrade project, led by quasar energy group, constituted design-build services of an anaerobic digestion system that was retrofit into the plant’s existing assets. Fully powered by a Flex Turbine® which converts gasses from the digesters into electricity, the system also includes flexible membrane roofs, heat exchangers, feedstock receiving, mixing system, and a pre-digestion Class A system.

In addition to enabling the facility to go off the grid, the upgrades have given EORWA the ability to harvest additional renewable energy from residual organic waste. Raw materials generated in the Ohio Valley such as agricultural and municipal waste, manure, plant material, sewage, food waste, etc. would otherwise be sent to landfills and buried. But the new anaerobic digesters installed by quasar energy group divert this waste and turn it into biogas for the microturbine.

“Upgrading to the anaerobic digesters was the most effective way to address infrastructure improvements without passing the costs on to ratepayers. Anaerobic bacteria break down the volatile solids in the digester, releasing biogas, which is then combusted by the Flex Turbine to generate electricity. The electricity generated then helps power the system, further enabling energy neutrality,” explained Renato Contipelli, Municipal Manager for quasar energy group.

The industrial Flex Turbine GT333S that powers the system is the most advanced in the industry with up to 85% Combined Heat and Power (CHP) efficiency and variable inlet guide vanes. With less than 9 ppmv of NOx the Flex Turbine readily meets even the strictest air quality standards and environmental regulations. The turbine has proven reliability (99+% uptime) and runs continuously off grid using the site’s digester biogas. This provides both clean air and renewable energy for the plant 24 hours per day, seven days per week.

"In looking at ways we could stabilize our rate structure, we wanted to think outside of the box and utilize new technologies. This project allowed us to go off the grid and be independent from the utility," said EORWA’s Executive Director, Valerie Moore. The resulting biosolids generated at the EORWA facility are designated as Class A/EQ Quality, which meets U.S. EPA guidelines for land application with no restrictions. Thus, the resulting class A biosolids will be used as a replacement for commercial fertilizer in the region. Primarily used on area farms for wheat, corn, and soybean crops, the commercial fertilizer offsets the use of chemical fertilizers that are derived in part from mining minerals and/or burning fossil fuels.

The company’s Application Engineering group develops combined heat and power solutions designed to produce specific performance outcomes for leading organizations worldwide. Developed over the course of two decades by Ingersoll Rand before its acquisition by FlexEnergy in 2010, Flex Turbines are the highest quality and most robust natural gas powered microturbine available in their class.

Industrial, commercial, and remote facilities that have a consistent need for remote, reliable, and low emissions power benefit from Flex’s ability to administer the highest level of service and expertise available quickly and economically.

About quasar energy group
quasar is a Cleveland, Ohio-based waste management and renewable energy firm. quasar specializes in anaerobic digestion as a means of deploying sustainable technology solutions in agricultural, industrial and municipal applications. quasar’s anaerobic digestion systems convert organic material, which would have traditionally been buried in a landfill or incinerated, into renewable energy and valuable fertilizer product. quasar’s turn-key solution to organics management is backed by a team of professionals with decades of hands-on operating experience.

About EORWA
The Eastern Ohio Regional Wastewater Authority (EORWA) was formed in 1958 in Belmont County. It was created to intercept the combined sewage outfalls from the communities of Bellaire, Bridgeport, Brookside, and Martins Ferry, convey the collected sewage to a central treatment plant, treat the sewage, and discharge the effluent to the Ohio River. The original treatment plant was constructed in 1964 with significant improvements completed in 1996, 1999 through 2001, 2010 and 2018.