One of America's favorite guilty pleasures, bacon, is once again center stage at this unique and extremely delicious festival. 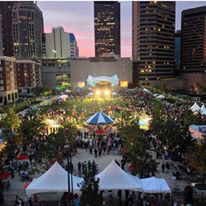 According to Mike Gallicchio, one of the event organizers, the Hog Roast is going to add a fun dimension to the festival and is a natural fit and will showcase the chefs from Great Lakes Brewing and a whole hog from local butcher Bluescreek Farm Meats.

Don’t miss one of the tastiest festivals of the season that is sure to delight bacon connoisseurs of all ages. The Ohio Bacon Festival returns to Ohio's capital city, Columbus, for the second year for a one night bacon and entertainment showcase.

The festival takes place at the Columbus Commons in downtown Columbus on Friday, September 9 from 5 p.m.-11 p.m. (VIP holders have one hour early entry into the festival.)

New this year is a "Hog Roast" presented by Great Lakes Brewing in conjunction with Bluescreek Farm Meats. According to Mike Gallicchio, one of the festival's organizers, "the Hog Roast is going to add a fun dimension to the Ohio Bacon Festival and is a natural fit and will showcase the chefs from Great Lakes Brewing and a whole hog from local butcher Bluescreek Farm Meats."

Performances on the Columbus Commons Stage include: The Fabulous Johnson Brothers, Trailer Park Ninjas, The Winnie Cooper Project and RP Hicks. The famous or "infamous" Bacon eating contest is back and will feature some extra special guests. Children will also have a chance to enjoy the festivities with rides and activities.

While the festival’s mission is to support food tourism in the vibrant downtown area and support small business, another very essential component to the the festival is to help build awareness and support local non-profit organizations that serve the Central Ohio community.This year’s festival hopes to build familiarity for Music Loves Ohio, a local non-profit that offers music education to children.

A detailed line-up of acts and start times will be available on the Ohio Bacon Festival website starting September 1, 2016.

General admission for the event is $5 and VIP tickets start at $25. VIP admission includes early entry a food ticket to Porky's Pub and Happy Hour drink pricing. Family packages are also available for a discounted rate. Check website for package rates. (Children 6 years of age and younger are admitted free.) To purchase tickets, visit ohiolovesbacon.com. The event is rain or shine.

The Ohio Bacon Festival would like to thank its sponsors including CD102.5, 614 Magazine, Great Lakes Brewing, Captain Morgan and the Shaun Stonerook Foundation. The festival is a production of MGN!, MikeGallicchioNow, and PSG, Prime Social Group.

Bring on the bacon.Photo courtesy of Prime Social Group.