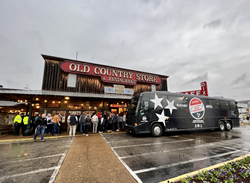 Old Country Store is a restaurant where down home people come to eat, so if you want to really connect with the voters in Jackson and West Tennessee, a lot of candidates see Old Country Store as a place to go to do that

For many years Old Country Store has been a traditional stomping ground for political candidates, and Gov. Bill Lee and U.S. Congressman David Kustoff kept the tradition alive with a stop at the family-owned tourist destination before the Nov. 8 election day.

“Old Country Store is a restaurant where down home people come to eat, so if you want to really connect with the voters in Jackson and West Tennessee, a lot of candidates see Old Country Store as a place to go to do that,” said OCS General Manager Brooks Shaw. He added that George H.W. Bush stopped at the restaurant in 1988 before he was elected as the 41st President of the United States.

Lee, Kustoff and other candidates spent time shaking hands and greeting potential voters in the restaurant. Lee and Kustoff are both running for re-election. About 100 people, including U.S. Congressman David Kustoff and elected officials at the state and local level, filled the restaurant’s largest meeting area, the Delta Room.

“Gov. Lee was good to us when he ran for election in 2018 with a lot of stops here, and he has returned on his re-election tour,” Shaw said. “Rep. Kustoff has been here a few times, also. They’re both supporters not only of the restaurant and the Village but also tourism in Tennessee in general. They see what tourism is to the state’s economy and know that there is potential for it to be even more beneficial to our state’s economy. Having people with that kind of vision serving in that capacity is big for the entire state.”

Shaw and his mother, Juanita, spent one-on-one time with Lee to share their prayers about his wife's battle with cancer and thank him for his service. This was the first time they had seen the governor in person, since he shared comments at the online memorial service for Clark Shaw. Clark, husband of Juanita and father of Brooks, passed away following COVID in November 2020.

Brooks Shaw’s Old Country Store has been in business for more than 55 years. With about 100 team members employed, they serve more than half a million residents and tourists each year. Built around its expansive Southern-soul buffet, Brooks Shaw’s Old Country Store serves local, national and international guests in an atmosphere filled with historic charm and modern updates. It also includes Miss Anne’s Ice Cream Parlor and a Southern Gift Shop. The campus includes Casey Jones Home and Railroad Museum, The Farm at Casey Jones Village, Art in the Village Gallery and The Old Country Store. More information is available at facebook.com/oldcountrystore, instagram.com/oldcountrystorecjv and caseyjones.com.