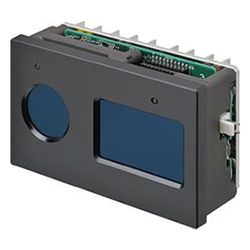 The B5L Time of Flight sensor module from Omron performs 3D sensing to detect the distance of a person or object in real time.

The Omron B5L series Time of Flight sensor utilizes unique optical design technology for stable measurement of three-dimensional distance information across a wide area -- even under sunlight. In addition, the B5L series features specifications optimized for long periods of continuous operation to allow it to be used as an embedded sensor in various instruments. This design results in a "mechanical eye" that is capable of accurately and easily detecting the surrounding environment – ultimately facilitating the use of autonomous robots in everyday life, as well as the automation of various other machinery and equipment.

The new module also has 3D capabilities; it can measure the distance of people and objects across a wide range in real time, at a distance of 0.5 to 4.0 m. The unit employs Omron’s Time of Flight sensor detection principle while utilizing original optical design technology. This enables stable detection under sunlight and more precise detection of distance from objects in various scenes. Additionally, built-in temperature compensation makes it easier to mount the module on autonomous robots and other equipment.

The B5L Series is designed not only for robots, but also for secure detection in applications where there is movement of people across a wide area -- such as in caregiver monitoring. Specific uses include AMR/service robots, logistics and conveyance, monitoring and observation and automatic doors/elevators.

Heilind Electronics, Inc. (http://www.heilind.com) is one of the world's leading distributors of connectors, relays, sensors, switches, thermal management and circuit protection products, terminal blocks, wire and cable, wiring accessories and insulation and identification products. Founded in 1974, Heilind has locations throughout the U.S., Canada, Mexico, Brazil, Germany, Singapore, Hong Kong and China. Follow Heilind on Facebook at facebook.com/Heilind and on Twitter at twitter.com/Heilind.