On Its 20th Birthday, Drupal Poised To Capture The Next Generation Of The Digital Experience Market

20 years ago, the Drupal project started in a dorm room—today it is a billion-dollar industry. 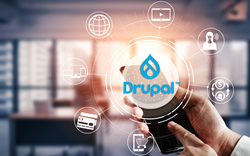 As part of this 20-year milestone, we celebrate our community of more than 100,000 contributors who made Drupal what it is today

Drupal, the world’s leading open source digital experience platform (DXP), celebrates 20 years of community-driven innovation. Since its founding 20 years ago, Drupal has touched millions of lives. One in 30 sites on the web is powered by Drupal, and that means most users of the web have experienced Drupal—even if they don't know it.

Redefining digital experiences
7 years ago—on the eve of Drupal's birthday—Drupal founder and project lead, Dries Buytaert, laid out his belief that the web was entering a new era.

“Mobile had transformed the web, but I believed this was just the beginning. The mobile web was the first example of a new web defined by digital experiences that conform to a user's context and devices,” says Buytaert. “Since then, Drupal has defined itself as the leading platform for ambitious digital experiences, and as channels and devices proliferate, Drupal will continue to lead the open source DXP market."

Powered by a global community of innovation
"As part of this 20-year milestone, we celebrate our community of more than 100,000 contributors who made Drupal what it is today,” says Heather Rocker, executive director of the Drupal Association. “Success at this scale is possible because the Drupal community exemplifies the values of open source and proves that innovation is sustained by healthy communities. One of our key goals at the Drupal Association is to convene the resources necessary for continued project innovation, and we do that through the collaboration of a global community that continues to grow year after year.”

In fact, Drupal's contribution increased by 13% in a year when many industries contracted due to the COVID-19 pandemic. Drupal's open source model has built a robust and thriving ecosystem of individual contributors, professional service providers, and end-user organizations that is well positioned to capitalize on the next 20 years of digital innovation.

Drupal continues to evolve, serving needs around the globe and expanding into new markets. Future-looking priorities include a continued positive impact on the Open Web, the cultivation of a diverse and inclusive open source community, and an increased focus on editorial experience and usability—to make the power of the Drupal digital experience platform even more accessible.

2021 will be marked with year-long celebrations happening around the world with particular focus at DrupalCon in April. Related 20th birthday events can be found on social media through the hashtag #CelebrateDrupal and at CelebrateDrupal.org.

About Drupal and the Drupal Association
Drupal is the open source digital experience platform utilized by millions of people and organizations around the world, made possible by a community of 100,000-plus contributors and enabling more than 1.3 million users on Drupal.org. The Drupal Association is the non-profit organization focused on accelerating Drupal, fostering the growth of the Drupal community, and supporting the Project’s vision to create a safe, secure, and open web for everyone.