On the 7th Anniversary of Creating iDiversicons™, the First Diverse Emoji, the African-American Inventor is now Using Them to Take on COVID-19

Houston resident Katrina Parrott has spent her entire life overcoming obstacles--and the dreaded Coronavirus is one of the biggest yet. 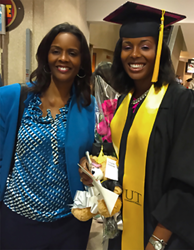 “The emojis you’ve been waiting for already exist.” —SEVENTEEN

As a kid, Katrina Parrott never dreamt she’d one day be breaking down racial barriers with emoji. In fact, as one of eight African-American siblings raised by a single mom, she wasn’t even expected to go to college. But after defying the odds, graduating from American University and becoming a cross-functional leader in the aerospace industry, she had a classic a-ha moment: her daughter Katy, a Public Health PreMed student at UT, was texting someone and blurted out, “Wouldn’t it be nice to have an emoji that looked like the person sending them?”

It was at that instant that Katrina was inspired to invent the world’s first diverse emoji called iDiversicons™. Finally, African-Americans and others had emojis that actually represented them, not someone else. Katrina’s hard-earned efforts in pioneering the five-skin tone emoji standard now used by Apple and Google were eventually highlighted in the documentary film Picture Character, which premiered at the Tribeca Film Festival and the American Film Institute DOCS, as well as countless other news publications across the country.

And today, as the Black Lives Matter movement coincides with the on-going Covid-19 pandemic, Katrina is using iDiversicons™ to not only help as many different people as possible express themselves, but to also encourage everyone to wash their hands and wear a mask—two simple acts, but also two of the most effective ways to stop the insidious Coronavirus in its tracks.

So on the 7th anniversary of iDiversicons™, help Katrina overcome yet another barrier by downloading the iDiversicons™ app and sending the handwashing and mask emoji to your friends and loved ones. While you’re at it, you can also send emoji featuring various ethnic groups, gender neutral, gender equality, hairstyles, religions, fraternities, celebrities, sports figures, holidays, mascots, disabilities, political affiliations, and more.

Throughout her life, Katrina has had to overcome some of the worst obstacles you can imagine. It’s her goal now to help others overcome theirs.

To watch the COVID-19 “Want to Stop the Spread of Coronavirus?” video, click on: https://www.youtube.com/watch?v=h2stLP6osPo

iDiversicons™ emoji and the new iOS animated 5-skin tone handwashing and mask GIFs are currently available for purchase from the Apple App Store at https://apps.apple.com/us/app/idiversicons-worlds-first/id947572946. Coming soon will be our new iDiversicons Android Sticker App in the Google Play Store.

About iDiversicons™
iDiversicons™ is a product of Cub Club Investment, which is headquartered in League City, Texas. Since launching the app in the App Store on October 11, 2013, Katrina Parrott has served as its Chief Executive Officer. Learn more at https://www.idiversicons.com