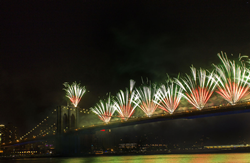 The new ONE15 Brooklyn Marina will feature one of the best views of Macy's annual 4th of July Fireworks display.

“The night sky will be illuminated right in front of our brand-new space, and we want the boating community to join in on the fun," said ONE°15 Brooklyn Marina Deputy CEO Estelle Lau.

ONE°15 Brooklyn Marina, New York City’s first new quay in decades, will be the best location to view the Macy’s 4th of July Fireworks in 2019, as the show is set to return to the Brooklyn Bridge following a multi-year stint on Manhattan’s East Side.

Those looking for a picturesque view of the nation’s most elaborate pyrotechnic display will find the perfect location in Brooklyn’s new, multifaceted and community-oriented marina. Set on 8 acres between Piers 4 and 5 in New York City’s most populous borough, ONE°15 Brooklyn, now operating at full capacity, offers recreational water access to the local community, New Yorkers and boating enthusiasts.

ONE°15 Brooklyn is renting individual boat slips for use during the fireworks display. The marina has a four-night minimum for the holiday week.

“Boaters are welcome at the marina for its incomparable view of the show,” said ONE°15 Brooklyn Marina Deputy CEO Estelle Lau. “The night sky will be illuminated right in front of our brand-new space, and we want the boating community to join in on the fun.”

Boaters who’ve rented slips can stop at ONE°15 for the unobstructed view of the 43rd annual showcase. The marina is now one of New York’s premier yachting destinations, too, meaning yachters can bring their vessels to the new operation on the banks of Brooklyn Heights.

ONE°15 Brooklyn will be front and center as the event’s four barges take position around the Brooklyn Bridge – three near the grand span and one closer to the mouth of the East River.

Macy’s 4th of July Fireworks Executive Producer Susan Tercero noted the display will “light up the New York skyline once again.” She also added: “We are excited to once again work with our partners in the City of New York to make the iconic Brooklyn Bridge the star of our show.”

After a period on the Hudson River and Midtown Manhattan, the fireworks display is making a triumphant return to Brooklyn’s iconic landmark – a suspension bridge that began construction in 1869. The bridge and its immediate surroundings will be on full display for millions in attendance and millions more watching at home.

ONE°15 Brooklyn Marina also features a Sailing Club and School, 100-plus berths for vessels up to 200-plus feet and a Community Dock that supports programs offering free and low-cost activities.

About ONE°15 Brooklyn Marina
ONE°15 Brooklyn Marina, Brooklyn’s gateway to New York Harbor, is a new marina that offers recreational water access to the local Brooklyn community, New Yorkers and boating enthusiasts from around the globe. Located just south of the Brooklyn Bridge between piers 4 and 5 in the Brooklyn Bridge Park, the Marina features a Sailing Club and School, 100-plus berths for vessels up to 200 feet and a Community Dock that supports community programs offering free and low-cost waterfront and boating activities. The marina is open from May 1 – Oct. 31 of each year, weather permitting. Find ONE°15 Brooklyn Marina on Instagram @one15brooklynmarina or on Twitter @ONE15BKMarina. Visit their website at http://www.one15brooklynmarina.com.

About Macy's 4th of July Fireworks
Macy’s 4th of July Fireworks are the nation’s largest 4th of July pyrotechnic celebration. Produced by Macy’s and designed by Macy’s in conjunction with PyroSpectaculars by Souza of Rialto, Calif., Macy’s Fireworks are a digitally synchronized display of firepower that is choreographed to a rousing popular music and patriotic score. Since 1976, Macy’s Fireworks have been annually launched from various locations across New York City, featuring shells and effects from all over the world. Seen by more than 2 million spectators and millions of viewers nationwide via a two-hour, No. 1-rated entertainment special, Macy’s 4th of July Fireworks have become the nation’s premiere Independence Day event.