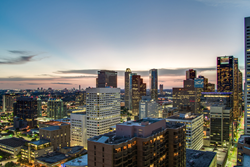 Having just celebrated their 10th anniversary, the prime location of the Houston high rise is one of the top selling points and continues to be the biggest mention among leases and prospective leases. One Park Place, known as OPP to beloved residents and locals, has continued to see immense growth and loyalty from residents over the past 10 years, thanks in part to their unparalleled service and their ideal Houston location.

The prominent downtown Houston apartments were developed, built, and managed by Houston real estate icon Marvy Finger of the Finger Companies. Mr. Finger has been profiled a number of times in the Houston Chronicle in regards to his business acumen, and most notably being able to secure and build upon some of the most coveted spots of buildable land in all of Houston.

Understanding that location is the key to successful multi-family real estate and drawing the attention of prospective residents, Finger builds his communities on the idea of “Main and Main,” which continues to prove as the highest selling point for apartment renters.

The downtown Houston apartments, which include some of the city’s most grand penthouses, have the 12-acre Discovery Green as their front yard. With all the programing, outdoor activities, artwork, and more that goes into Houston’s prominent Discovery Green Park, that’s a huge advantage of living at One Park Place and its central location.

Residents don’t have to look or walk far to get groceries either, having the award-winning Phoenicia Gourmet Grocery Store on-site, with a private entrance solely for One Park Place residents. There are also multiple on-site bars and restaurants, making dining out or having food delivered directly to your door easier than ever.

Location is especially key in a city like Houston, which ranks as the 9th worst traffic congestion in the U.S., according to the 2019 Urban Mobility Report. Convenient access to on-site grocery stores, some of downtown Houston’s best restaurants and entertainment, as well as access to nearby highways is a top criterion for Houstonians when searching for apartments and homes. This is just one reason Marvy Finger and his apartment communities are always at the top of many apartment hunters’ wish list, because in all major cities, location is king.

It’s clear the residents love the location of these downtown Houston apartments, which boasts above average retention rates. In fact, many original residents still call the high rise home, and many have attributed their loyalty and lease renewals to its premier Houston location. In fact, over the span of a decade, the downtown Houston apartment community has had more than 55 residents leave for one reason or another – usually related to a new job – and all return back to One Park Place for two main reasons: service and location. Read more.

About The Finger Companies
Under the leadership of veteran developer Marvy Finger – whose 60-year plus track record speaks for itself – the Finger Companies has earned an undisputed reputation as the leading independent developer of luxury apartment homes in the country for one reason: unwavering commitment to excellence. With a visionary knack for finding the best locations, the Houston, Texas-based company has led the industry in the highest quality construction, cutting edge design, lush landscaping, envelope-pushing amenities, and unparalleled property management for six decades. One Park Place luxury apartments are owned and operated by The Finger Companies.