Research Indicates High Conflict, Nasty Divorces Can Be Prevented and Contained with Parental Skills-Training. New Ways For Families Partners with OnlineParentingPrograms.com to Provide These Skills Online. 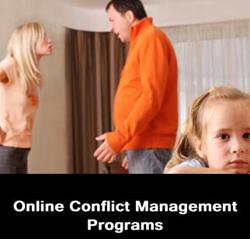 High-Conflict by News Fays for Families

Parent education programs help reduce conflict by building better communication, developing closer relationships between parents and children, reducing stress and allowing for a better adjustment throughout the different stages of divorce or separation.

Ugly divorces and co-parenting battles are a huge drain on everyone involved, particularly the kids. These dreadful long-term battles drain the court’s resources, frustrate attorneys, judges, mediators and mental health professionals, and they significantly impact the children’s health, both emotionally and physically. Research shows that kids who grow up in highly conflicted homes are more likely to have unhealthy outcomes throughout their lives.

Until recently, there was little help for high-conflict families, but new research released in October 2013 out of Medicine Hat, Alberta, Canada, demonstrates that some people who have high conflict personalities and have previously not been able to resolve conflict are able to turn that around when taught new conflict skills. They don’t learn through lectures; instead, they learn by practicing new skills that focus on managing their emotions, having flexible thinking and moderate behaviors. The result is a win for the kids.

New Ways for Families and OnlineParentingPrograms.com have teamed together to provide these skills to families across the globe. New Ways for Families is a skills-based method, built on evidence-based programs for people who have relationships disorders. Up to now, New Ways has been available in four models: court-based counseling, collaborative divorce, decision skills class, and pre-mediation coaching.

This new partnership between OnlineParentingPrograms.com and New Ways for Families expands this skills-based program to an online model, which aligns with the court’s movement toward online education. Parent education programs help reduce conflict by building better communication, developing closer relationships between parents and children, reducing stress and allowing for a better adjustment throughout the different stages of divorce or separation. OnlineParentingPrograms.com offers co-parents an alternative in the form of online parenting classes to help fulfill that obligation.

New Ways for Families was released in 2009 as a project of the High Conflict Institute, led by author and speaker, Bill Eddy, LCSW, Esq. who created the program. New Ways emphasizes strengthening skills for positive future behavior (new ways), rather than focusing on past negative behavior – while still acknowledging it. It is designed to save courts time, to save parents money, and to protect children as their families re-organize in new ways after a separation or divorce, for married or never-married parents.

If you would like more information about this topic or to schedule an interview with Bill Eddy, LCSW, Esq., please contact Michelle Muncy at 866-504-2883 or michelle(at)onlineparentingprograms(dot)com.