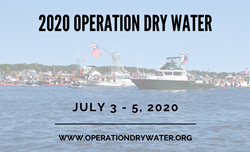 The mission of the Operation Dry Water campaign and the agencies who participate is to reduce the number of alcohol- and drug-related deaths on the water. Incidents and fatalities that are a result of boating under the influence are 100% preventable.

“The decision on whether or not to boat under the influence is a choice each boater is faced with,” says Cody Jones, NASBLA Chair. “The mission of the Operation Dry Water campaign and the agencies who participate is to reduce the number of alcohol- and drug-related deaths on the water. Incidents and fatalities that are a result of boating under the influence are 100% preventable. Those involved in Operation Dry Water, including participating law enforcement agencies and our boating safety partners, urge every boater keep themselves and others safe by choosing to stay sober while boating.”

Alcohol use is the leading contributing factor in recreational boater deaths, and a leading factor in recreational boating accidents.* Over the course of the three-day weekend, law enforcement officers and outreach partners will be on the water educating the boating public on the dangers associated with boating under the influence. Officers will also be on heightened alert for those in violation of boating under the influence laws and removing dangerous boaters from the waterways.

Since the launch of the Operation Dry Water campaign in 2009, 4,095 impaired operators have been removed from our nation’s waterways, preventing dangerous and potentially tragic consequences. Officers have also made contact with over 1.5 million boaters during the annual three-day weekend as part of the awareness campaign. In 2019, 736 agencies from every state and territory participated in Operation Dry Water.

Alcohol consumption while boating is not only dangerous for the operator of the vessel, but also for passengers. Impairment can lead to slips, falls overboard, injuries and deaths that could have been prevented if they had made the decision not to drink alcohol, or be otherwise impaired, while boating. When alcohol is involved, the risk of dying is the same for an impaired operator and an impaired passenger, and for men and women.**

Operation Dry Water is a year-round boating under the influence awareness and enforcement campaign with the mission of reducing the number of alcohol and drug-related incidents and fatalities through increased recreational boater awareness and by fostering a stronger deterrent to alcohol and drug use on the water. For more information about Operation Dry Water visit http://www.operationdrywater.org.

Operation Dry Water is produced under a grant from the Sport Fish Restoration and Boating Trust Fund, administered by the U.S. Coast Guard and is a product of the National Association of State Boating Law Administrators.