Eight military children to receive $10,000, a laptop, and more, through annual Operation Homefront Military Child of the Year program 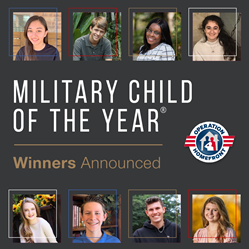 “All of our nominees deserve special recognition as they and their families not only overcame the challenges inherent in military life, but did so while dealing with the devastating and disruptive impacts of a global pandemic.” Brig. Gen. (ret.) John I. Pray Jr., President & CEO, Operation Homefront

Operation Homefront, the national nonprofit whose mission is to build strong, stable, and secure military families, today announced the eight recipients of the esteemed 2021 Military Child of the Year® Award, the nation’s premier recognition of the outstanding achievements of our military children.

Now in its 13th year, the Military Child of the Year® Award reflects the positive impact that these impressive young people have made on their military families, their schools, and their communities. Operation Homefront will recognize the recipients with a special extended virtual celebration beginning on April 8 followed by 10 days to recognize each awardee via its digital channels. Each awardee will receive a $10,000 grant, a laptop computer, and more.

“We are excited to honor these eight exceptional young people for their extraordinary individual accomplishments and for the strength and resiliency they demonstrated as representatives of the larger community of approximately two million amazing military kids,” said Brig. Gen. (ret.) John I. Pray Jr., President and CEO of Operation Homefront. “All of our nominees this year deserve special recognition as they and their families not only overcame the many challenges inherent in military life, but they did so while dealing with the devastating and disruptive impacts of a global pandemic...a tribute to the strength of our military families.”

The seven branch recipients — Army, Marine Corps, Navy, Air Force, Coast Guard, National Guard, and for the first time this year, Space Force — will represent the armed forces branch in which a parent either serves or has served. Selection was based on scholarship, volunteerism, leadership, extracurricular involvement, and other criteria, all accomplished during a pandemic, while schools were closed and the world went virtual. Each awardee was selected by a panel of independent volunteer judges with deep roots in the military community. The eighth award is the Military Child of the Year® Award for Innovation, presented by global technology and consulting firm Booz Allen Hamilton. This award goes to a military child who has designed a bold and creative solution to address a local, regional, or global challenge. The Military Child of the Year® Award for Innovation recipient will work virtually with a team of employees from Booz Allen Hamilton who will provide project support.

The 2021 Military Child of the Year® Award recipients are as follows: