Secure Your Network with ease. 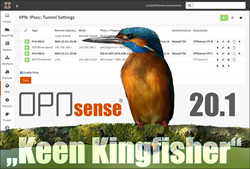 Just like the Kingfisher, OPNsense progresses fast, with every major release proving to hold a long list of improvements, new features and the expansion of its community base. At the same time the user interface is just as pleasant to look at as the bird’s feathers.

OPNsense is the fastest growing open source security platform with an Open Source Initiative (OSI) approved 2-clause or simplified BSD license. Its feature set is extensive and ranges from
router/firewall to inline intrusion detection and prevention.

It is the only open source product that comes with the highly valued Proofpoint® ET Pro ruleset at no cost in the form of the ET Pro Telemetry edition.

The project is defined by its innovation through modularizing and hardening, simple and reliable firmware upgrades, multi-language support, HardenedBSD security, fast adoption of upstream software updates as well as a large and friendly community.

As with every release, minor or major, the latest security patches have been applied and the latest component versions have been included. As such, the migration to Python 3 has been fully completed.

The mission to make OPNsense the most widely used open source security platform is well on its way.

Deciso is the company that founded the OPNsense project and offers turnkey solutions as well as commercial support and services.

About Deciso
Deciso B.V. is a global manufacturer of networking equipment. The company designs and produces complete products for integrators, oems and resellers. Deciso believes in the power of open source and actively contributes to the open source community. The company is founded in 2000 and is located in Middelharnis, the Netherlands.