Returning for its seventh run in early August, Mile of Music, presented by Fox Communities Credit Union, set record numbers for attendance, volunteers and participants at the corresponding Bike to the Beat event. The four-day festival showcased original music from 220 touring artists with 950 sets spread across 60 venues in Downtown Appleton, Wisconsin. 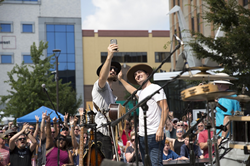 We’ve been very fortunate to attract such a wonderful mix of emerging talent and hear from musicians that this festival has become one of their favorites.

As one of the world’s largest and most unique free music festivals showcasing original, up-and-coming indie artists from around the country, Mile of Music, presented by Fox Communities Credit Union, was a huge success when it returned to Downtown Appleton, Wisconsin, earlier this month.

The popular festival set some new records in its seventh year – Mile 7 – with an estimated 90,000 attendees, 500 volunteers and 3,600 riders in Fox Communities’ corresponding Bike to the Beat fundraiser event. It welcomed 220 artists to play 950 live sets at 60 venues up and down the one-mile stretch of the festival and had an economic impact of more than $5 million.

“Since the start, our target artists for The Mile are those who are up-and-coming on the music scene with names people may not know yet, but definitely should,” explained Dave Willems, executive producer and co-founder of the festival. “We’ve been very fortunate to attract such a wonderful mix of emerging talent and hear from musicians that this festival has become one of their favorites.”

Mile 7 saw the much-anticipated return of Jones Park, a main stage venue that was out of commission for the previous two festivals because of extensive renovations that included construction of a new amphitheater. The Music Education Team was also back in action with nearly 50 scheduled and spontaneous, hands-on performances that gave attendees of all ages the chance to get in on the music-making with instrument, dance and other interactive workshops demonstrating different music styles from around the world.

The festival again featured the Artist Care Program, providing several extra services to traveling artists at no charge, including dental care, hearing and skin cancer screenings, physical and massage therapy and much more.

“In all my life of playing music and festivals, this is the very first time I have shown up and seen a ‘free skin cancer screenings’ sign,” said Mile 7 artist Rob Stroup of Moody Little Sister. “Mile of Music may have saved my life! After my screening, I was scheduled for outpatient surgery for the removal of a spot that turned out to be melanoma. I am so deeply grateful. A special thanks to Dr. Michelle Cihla and the fine folks at Forefront Dermatology for giving this very special gift to me.”

New to Mile 7 was the Tiny House Listening Lounge hosted by Mile alum Jamie Kent and set up on the Lawrence University campus with solo and duo acts performing in a relaxed, listening-first setting. Kent also presented “Peace, Love and the Ladies of Nashville,” a special show that highlighted four powerhouse songstresses with ties to Music City – Potenza, Megan Slankard, Michaela Ann and VOLK.

Local artists contributed to the one-of-a-kind Mile vibe in a visual sense as Chad Brady painted a large outdoor mural that captures the look of various festival logos on a building next to Downtown Appleton’s College Avenue. Leif Larson also unveiled his massive 5’ x 32’ grayscale acrylic painting inside the Red Lion Hotel Paper Valley that provides a stunning aerial view of Mile of Music during the weekend’s festivities. There were gig posters created, too, by ten local artists for ten Mile 7 musicians.

The music-filled weekend was made possible by presenting sponsor Fox Communities Credit Union as well as 80 general and venue sponsors, 60 venue owners and staffs that served as concert hosts, 30 sound techs, 500 volunteers, The Mile Team and many more contributing organizations and individuals.

“It amazes me how much support is poured into this festival and how our community continues to embrace everything about it,” Willems explained. “It will be exciting to see what comes next with Mile 8!”

ABOUT MILE OF MUSIC
Mile of Music is an original roots music festival that launched in August 2013 as a creative and economic catalyst in Downtown Appleton, Wis. The four-day festival is held in August with the support of more than 100 community partners and supporters and 500 volunteers. It features 950 live music sets and 220 artists at 60 venues along the one-mile, walkable stretch of College Avenue and the nearby riverfront. It is free and accessible to all.