Xulon Press presents an illustration of our choices and their consequences. 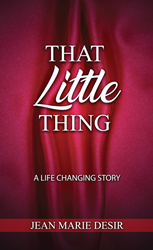 I [want] to encourage them not only to hold to biblical values but to see how doing so would be to their advantage.

At her high school graduation, Ananie is comforted by the presence and support of both her parents. She recognizes the feelings they still have for one another, even after their divorce. Ananie’s mother tries to explain what tore their marriage apart as they all look hopefully toward the future.

Desir said he was inspired by his desire to “impart a message of empowerment, dignity, and respect toward young women. I [want] to encourage them not only to hold to biblical values but to see how doing so would be to their advantage.”

BIO: Jean Marie Désir was born in Port-au-Prince, Haiti, in a Christian family. At the age of ten, he realized he truly had a passion to sing for the glory of God, with whom he began to build a long-lasting relationship. He studied Management at L’Institut Superieur de Biblioeconomie et de Gestion and later moved to Miami, FL, where he earned a degree in computer business application.

Xulon Press, a division of Salem Media Group, is the world’s largest Christian self-publisher, with more than 15,000 titles published to date.That Little Thing is available online through xulonpress.com/bookstore, amazon.com, and barnesandnoble.com.