“Islam Rising: Christianity Waning in Europe and the USA” from Christian Faith Publishing author Orlean Koehle is a comprehensive account that delves into the influx of Islamic ideology in Europe and America that greatly shifts religious and societal norms. 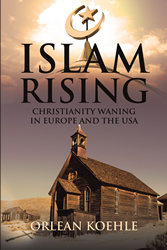 “Islam Rising: Christianity Waning in Europe and the USA”: an in-depth compendium that looks into the decline of Christianity and the rise of Islam in the Western culture that is evident in religious, communal, and educational settings. “Islam Rising” is the creation of published author Orlean Koehle, a former history/English teacher in the public schools and the state president of Eagle Forum of California.

Koehle shares, “What is causing the backward transformation that Europeans are experiencing, bringing parts of Europe back to almost the same state of terrorism and loss of freedom when they were once shackled under Nazi and Communist occupations?

“What has happened to Christianity in Europe? How many churches are now standing empty, being turned into museums or concert halls, or being sold as mosques?

“What has happened to the demographics of Europeans now in such decline? How soon will original Europeans no longer exist, replaced by the soaring populations of Muslims?

“What is the true history of Islam and the ideology driving their acts of terrorism? Why is this being whitewashed in the media and in European and American public schools as the schools are promoting pure Islam propaganda?

“How is the USA following the same pattern set for us in Europe with their massive influx of immigrants and refugees? Who are the various secular and nonsecular groups driving the refugee program, and how much money is being made by them?

“What are the huge numbers of immigrants and refugees doing to our own country? How are small town and communities and their schools suffering with such a huge influx of migrants who do not share a common culture, language, traditions, or religion? What can we learn from this book before it is too late?”

Published by Christian Faith Publishing, Orlean Koehle’s new book analyzes the inner workings of the immigration system of Europe and America that has proved to be a massive influence on the upsurge of Islamic belief in Western countries.

This book answers intriguing and sensitive dilemmas on identity, patriotism, and worldview that concerns the enculturation of Islam in Western society.

View the synopsis of “Islam Rising: Christianity Waning in Europe and the USA” on YouTube.

Consumers can purchase “Islam Rising: Christianity Waning in Europe and the USA” at traditional brick-and-mortar bookstores or online at Amazon.com, Apple iTunes store, or Barnes and Noble.

For additional information or inquiries about “Islam Rising: Christianity Waning in Europe and the USA,” contact the Christian Faith Publishing media department at 866-554-0919.