The amount of $315,000 will be donated to the Solomon R. Guggenheim Foundation in New York in support of the “Mind’s Eye” program 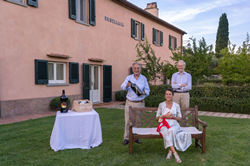 “The huge success that the Mind’s Eye program is having, also thanks to our donations, fills us with pride, especially when we observe how the same model can extend to other Guggenheim museums, and to other art institutions in the rest of the world.” – Giovanni Geddes da Filicaja, Ornellaia CEO

Yesterday evening, Marchese Ferdinando Frescobaldi, President of the prestigious Bolgheri winery Ornellaia, and Giovanni Geddes da Filicaja, CEO, personally handed a check for $315,000 to Karole Vail, Director of the Peggy Guggenheim Collection, part of the Solomon R. Guggenheim Foundation. The donation was possible thanks to the Ornellaia Vendemmia d’Artista 2017 “Solare” edition and sales of the prized limited-edition bottles designed by the artist Tomás Saraceno.

For the last twelve years, Ornellaia has been furthering the Vendemmia d’Artista project, which supports foundations and museums around the world through the union of art and wine. Since last year, thanks to a collaboration with the Guggenheim, it has raised funds to support an equally innovative initiative: The “Mind’s Eye” program at the Solomon R. Guggenheim Museum.

The “Mind’s Eye” program was created by the Guggenheim’s Education Department to gift the joy of art to visitors who are blind or have low vision. The appreciation of art, like wine, involves all the senses. This was the idea that inspired Ornellaia to donate the profits from the annual Vendemmia d’Artista auction to this program.

Giovanni Geddes da Filicaja, CEO of Ornellaia, commented, “The huge success that the Mind’s Eye program is having, also thanks to our donations, fills us with pride, especially when we observe how the same model can extend not only to other museums belonging to the Guggenheim Foundation, but also to other art institutions in the rest of the world, ensuring that this excellence continues to guide museum programming for the blind and persons with low vision, and to all people across the world.”

At the end of the auction, which was held online by Sotheby’s from the 1st to the 9th of September, Richard Armstrong, Director of the Solomon R. Guggenheim Museum and Foundation, said, "Through the continued support of Ornellaia, the Guggenheim has been able to offer greater access to our programming and to deepen audience engagement. We extend our gratitude to Ornellaia for recognizing the importance of programs such as Mind’s Eye and for their generosity.”

The Ornellaia Vendemmia d’Artista project celebrates and describes the character of every new vintage of Ornellaia. Every year, starting with the release of Ornellaia 2006, a contemporary artist crafts a site-specific artwork and a set of limited-edition labels, inspired by a word chosen by the Estate Director, Axel Heinz, to describe the vintage.

“Solare” (radiant in English) is the epithet chosen by Heinz to describe the 2017 vintage of this wine: “It was a year of extremes, in which sun and heat played a decisive role. By adapting to the conditions with more precise and flexible practices, we succeeded in voicing the bold personality of this vintage.”

Based on the descriptor, Tomás Saraceno gave his interpretation of Ornellaia 2017 “Solare.” The artist sought inspiration in the alliance between the sun and populated systems of life, inviting greater care and attention to the most important source of our planet’s energy; the sun, which is depicted in the evolution of an eclipse. The issue of sustainability is explored through floating spheres such as “PNEUMA 4.21x105,” the sculpture that tops the Salmanazar, and the special thermodynamic labels, which like the ecosystems in which we live, are heat sensitive.

About Ornellaia - http://www.ornellaia.com
Ornellaia’s philosophy considers the birth of the wines to be the truest expression of their terroir. The grapes for Ornellaia are selected by hand, and picked in the estate's vineyards in Bolgheri, on the Tuscan coast. The varying natures of the estate's terroirs, marine, alluvial and volcanic, are ideal for the cultivation of Cabernet Sauvignon, Merlot, Cabernet Franc and Petit Verdot. The Estate extends over 115 hectares along the Tuscan coast, just a short distance from the medieval hamlet of Bolgheri and the famed cypress-lined avenue ‘Viale dei Cipressi.’ The constant work of the Ornellaia team and the ideal microclimatic and geological characteristics have brought the wines great international success since the first vintage of Ornellaia in 1985. In 2001, the 1998 Ornellaia was declared Wine of the Year by the American journal Wine Spectator. In 2011 the German publication Der Feinschmecker awarded Ornellaia its most sought-after award, the ‘Weinlegende.’ Ornellaia has received considerable recognition in the national and international press, and is consistently ranked among the top estates by Wine Advocate, Wine Spectator, James Suckling, Antonio Galloni, Bruce Sanderson and the Italian Wine Guides: Gambero Rosso, Espresso, and Veronelli

About Vendemmia d’Artista
The Ornellaia Vendemmia d’Artista project celebrates the exclusive character of every new vintage of Ornellaia. Every year, starting with the release of Ornellaia 2006 in May 2009, a contemporary artist crafts a site-specific artwork and a set of limited-edition labels, inspired by a word chosen by the Estate Director, Axel Heinz, to describe the personality of the new vintage.

A label styled by the artist features on one of the six 750ml bottles in every case of Ornellaia. As in previous years, the project includes a limited edition of 111 large-format bottles (100 Jeroboams - 3 liters, 10 Imperials - 6 liters and 1 Salmanazar - 9 liters) which are numbered and signed personally by the artist. Every year, a selection of these bottles is auctioned by Sotheby’s and the profits go to support the Mind’s Eye program at the Solomon R. Guggenheim Foundation.

About the “Mind’s Eye” program
The “Mind’s Eye” program, created by Guggenheim’s Education Department, assists visitors who are blind or have low vision in experiencing art by using all the senses. This approach promotes the development of creative impressions, emotional connections and memories, whose perception endures over time. As in art, the appreciation of fine wine requires the involvement of all the senses. It was this shared idea that resulted in Ornellaia lending its support to develop this particular program. Donations collected through Ornellaia Vendemmia d’Artista project enable the Solomon R. Guggenheim Foundation to further the activities of the “Mind’s Eye” program aimed at distributing the model in other art institutions, ensuring that its excellence continues to guide the museum programming for the benefit of the blind and persons with low vision all over the world.