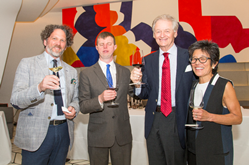 From 2019 through 2021, the profits of Ornellaia’s Vendemmia d’Artista project will exclusively benefit the long-term sustainability of ‘Mind's Eye’, and will allow the Guggenheim Museum in New York to further develop the program and continue to lead the way in universal access museum programming.

One of Italy’s most highly regarded estates, Ornellaia, is pleased to announce its support of the Solomon R. Guggenheim Museum as part of a three year relationship that will allow the expansion of ‘Mind's Eye,’ a Guggenheim program developed by the museum’s education department in 2008 that offers opportunities for individuals who are blind or have low vision to explore art through tours, workshops, and sensory experiences.

From 2019 through 2021, the profits of Ornellaia’s Vendemmia d’Artista project will exclusively benefit the long-term sustainability of ‘Mind's Eye’, and will allow the Guggenheim Museum in New York to further develop the program and continue to lead the way in universal access museum programming. This will include increasing the frequency of this important program to twice monthly, as well as have a dedicated staff person overseeing its expansion and other access programming. The Guggenheim will also be able to hire a professional evaluator to analyze the program’s impact, plus share the assessment research and best practices online.

“Ornellaia’s generous support of our ‘Mind’s Eye’ program ensures that we can further expand its reach, providing diverse public constituencies meaningful access to our exhibitions,” noted Richard Armstrong, Director of the Solomon R. Guggenheim Museum and Foundation. "We are deeply grateful to Ornellaia for their commitment to donate proceeds from the sale of Ornellaia Vendemmia D'Artista to the Guggenheim. Their longstanding involvement with the visual arts is commendable.”

With the goal of connecting the worlds of art and fine wine, Ornellaia CEO, Giovanni Geddes da Filicaja announced at a ‘Mind’s Eye’ event for press in New York on June 17 that Sotheby’s Wine, longtime partner of Ornellaia’s Vendemmia d'Artista project, will host an online auction for the 11th edition. The online auction will run from August 29 to September 13 at 7:30pm (Italy time) and will feature the 6-liter Imperial formats and the unique 12-liter Salmanazar designed by the American artist Shirin Neshat for the Vendemmia d’Artista Project. The final sum raised to support the Mind’s Eye program through the sale of these exclusive large formats will be announced at an Ornellaia event held at the Peggy Guggenheim Collection in Venice on September 13.

The concept of Neshat’s work centers around the theme of wine as a moment of social sharing, a life force that in the words of Persian poet Omar Khayyām should be “enjoyed during our brief time on earth.” The labels represent details of female faces, hands, and bodies completely covered by Farsi calligraphy. These contrasts between the softness of the skin and the graphic nature of the text seduce the eye and engage the imagination.

Following the announcement, Giovanni Geddes da Filicaja was joined at the event by sensory awareness expert, Dr. Hoby Wedler, who himself is blind, to present a unique exploration of the senses for both wine and art as part of a blind tasting and ‘Mind’s Eye’ tour of the current exhibition. Known for his immersive sensory explorations of wine aromas, Dr. Wedler teamed up with Ornellaia’s Winemaker and Estate Director, Axel Heinz, to help guests better understand the nuances of Ornellaia’s wines using senses other than sight, mirroring the approach of the ‘Mind’s Eye’ program.

“When all senses are invoked, possibilities expand for making imaginative impressions, emotional connections, and long-lasting memories,” noted Dr. Wedler. “Working together with Axel, we tried to find new pathways for lovers of fine wine to connect on a deeper level with these incredible wines, and hopefully give people a better understanding of sensory exploration. I am proud to be helping bring awareness to what Ornellaia and the Guggenheim Museum are doing with universal access for arts to the visually impaired with this relationship.”

About Vendemmia d’Artista
Vendemmia d'Artista celebrates the exclusive character of each vintage of Ornellaia. Since the initial release of Ornellaia 2006, Ornellaia has commissioned an internationally-famous contemporary artist to create a work of art for the estate and a series of limited-edition labels, inspired by the character identified by the Winemaker and Estate Director, Axel Heinz, to describe the particular characteristics of the new vintage. 111 large formats, of which 100 3-liter Double Magnums, 10 six-liter Imperials and a nine-liter Salmanazar, are sold or auctioned off by Sotheby’s Wine for charity.

For the 11th edition of the Ornellaia Vendemmia d’Artista project, Ornellaia commissioned American artist Shirin Neshat to interpret the character of the Ornellaia 2016 wine “La Tensione” (Tension); with her disruptive and poetic visual language, the photographer, filmmaker and video-artist alludes to this vintage’s dynamism and strength through the words of the illustrious 11th-century Persian poet, Omar Khayyām. The artist created a site-specific art installation for the Estate, customized a limited series of 111 large format bottles, and designed a special label that, a single example of which, will be found in each Ornellaia case containing 6, 750ml bottles.