Set up in 1996, the Vinitaly International Award is given to Italian and international personalities, companies or institutions distinguished for their efforts on behalf of the wine field. The award was presented during the Gala Dinner preceding the inaugural day of the trade fair, where Madeline Puckette was proclaimed Communicator of the Year 2019. 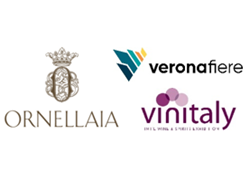 In 2019, the winners of the Vinitaly International Award are Ornellaia, in recognition of its excellence in winemaking; Leon Liang for his skill in communicating fine wines to Chinese trade and consumers; and Demei Li, for helping to improve the quality of Chinese wines.

Three more important names join the roll of honor of the Vinitaly International Award for companies or professionals who have distinguished themselves in the qualitative development of wine-growing and oenology in Italy and abroad. The award was established by Veronafiere in 1996 on the occasion of the thirtieth anniversary of the event.

The award-winners are: Ornellaia in recognition of the excellence of its wines; Leon Liang, one of the founders of the most important and innovative school for wine education in China; and Demei Li, the oenologist who first helped Chinese wine win an international award.

During the Gala Dinner, Madeline Puckette was also proclaimed winner of the 2019 edition of the prestigious "Wine Communicator of the Year" award sponsored by Vinitaly.

These are the motivations for the awards:

Ornellaia is a wine and an estate that has in a very short time become a symbol of Made in Italy excellence. Founded only in 1982, and therefore quite young by Italian winemaking standards, Ornellaia has succeeded in producing a range of wines that are much sought after all over the world. The estate’s flagship wine, the Bordeaux blend Ornellaia Bolgheri Rosso, is one of Italy’s true cult wines, and its 100% Merlot Masseto is possibly even more famous and sought after. Perhaps more importantly, Ornellaia has helped fashion a new and important Italian wine denomination, Bolgheri, once a wild coastal land where cattle and cowboys, not wine, ruled. Led by its forward-thinking CEO, Giovanni Geddes da Filicaja, Ornellaia belongs today to the Tuscan Frescobaldi family and has been turned into a real luxury brand. Every year a famous artist is called to create a label and sign 111 large bottle formats that showcased in auctions in which collectors and wine lovers from all over the world bid for these unique lots.

Leon Liang has been a great and passionate promoter of Italian wine for more than 10 years, having perfected his knowledge through many study trips to Italy. Together with the only Chinese Master Sommelier, Yang LV, he founded GRAPEA - the most important and innovative school for wine education in China. Grapea and its team of more than 20 people conducted in 2018 alone more than 150 seminars and wine tastings in 14 cities throughout China. Grapea also collaborates with the most important international associations in the world of wine and a growing number of Italian consortia. Leon Liang, precisely for this reason, is becoming an essential landmark for the wine market in China through his extraordinary skill in knowing how to reach out to the world of Chinese trade and consumers alike, while at the same time highlighting the unique features of quality Italian wines where diversity and entrepreneurial talent come together in an extraordinary "unicum.” Liang is consequently the most significant exponent of the rebirth of fine wines imported by China and a vital partner for understanding development trends and future wine scenarios in the country.

Demei Li is an associate professor of Food Science and Technology College in Beijing University of Agriculture and invited teacher at ESA Angers, France. Demei is China’s leading enologist and is credited as a driving force for improving wine quality at Chinese wineries. He was the first chief winemaker and technical director for the Chinese-French government-joint venture project, Domaine Franco Chinois. He consults for several wineries in China, including Helan Qingxue, Leirenshou in Ningxia, and Tiansai, Zhongfei in Xinjiang. In 2011, when he was the consultant winemaker at the Helan Qingxue vineyard, its wine Jia Bei Lan won the International Trophy from the Decanter World Wine Awards 2011 in London; it was the first time Chinese wine had ever won this prize, creating quite a stir. In fact, Professor Li has become arguably China’s finest winemaker, and Demei is considered the equivalent of Michel Rolland in China by many. Li Demei is responsible for helping improve the quality of Chinese wines in the global stage with his various consulting work, particularly in China’s northwestern Ningxia and Xinjiang provinces. Demei won the 2012 Wine Intelligence 10-for-10 Business Award, was on the Decanter 2013 Power List, and was named one of the Top 10 Most Influential Wine Consultants by the Drinks Business in 2013. As a columnist, Demei contributes to many prestigious wine publications, including DecanterChina.com. He is one of the contributors for The Oxford Companion to Wine (4th edition).

Madeline Puckette is a young American wine writer, blogger, and co-founder of WineFolly.com, a highly successful blog which provides information and accessible content about wine for beginners and experts alike thanks to informative infographics and a captivating writing style. In 2013, Puckette won the title of Wine Blogger of the Year, and since then has published articles in The Washington Post, The Wall Street Journal and The New York Times. In 2018, her book “Wine Folly: Magnum Edition, The Master Guide" ranked among the top five food and wine pairing books sold by Amazon. In addition to the United States, the Wine Folly book was also launched in Great Britain, Holland, China, Japan, and Russia. The Wine Communicator of the Year Award, established in collaboration with the IWSC - International Wine and Spirit Competition, will be presented in London on November 13.