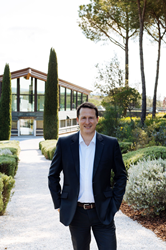 “Continuing the work carried out by Tim Banks will be an exciting challenge, which I cannot wait to begin.” - Vianney Gravereaux, new Sales and Marketing Director for Ornellaia and Masseto

Today, Giovanni Geddes da Filicaja, CEO of both the Ornellaia and Masseto estates, announced a change in the management team for the two wineries. Vianney Gravereaux will join the team as Sales and Marketing Director alongside Axel Heinz, Estate Director, as of April 1, 2021. Tim Banks, who has held the position to date, will return to France, where he will continue to work in the wine world.

After nine years of close collaboration, Tim Banks receives a warm farewell: “I thank Tim personally for his professional contribution to the company’s success as well as his personal contribution in forming a team and relations, for which he will not be forgotten easily,” confirms Giovanni Geddes. “At the same time, I am delighted to continue this journey with Vianney. I’m certain that we will achieve new goals together.”

Vianney Gravereaux, French by birth but multilingual by vocation, has vast international experience in the fine wine world, which he honed while working for globally renowned brands such as Philipponnat, Salon and Peugeot Saveurs. Formerly International Sales Manager for Masseto, Gravereaux was asked to take on the new role, an offer which he has enthusiastically embraced: “When I visited Ornellaia a few years ago, I was astounded by the exceptional quality of the wines and the place where they are made. I never thought that I would become part of the impressive Masseto team in 2020 and that, only a year later, I would have been offered the role of Sales and Marketing Director for both estates. Continuing the work carried out by Tim Banks will be an exciting challenge, which I cannot wait to begin.”

About Ornellaia - http://www.ornellaia.com
The name ORNELLAIA is synonymous with fine winemaking and an authentic expression of the beauty of Tuscany. The estate consists of 115 hectares under vine along the Tuscan coastline, a short distance from the medieval town of Bolgheri and the iconic cypress-lined avenue. Ornellaia Bolgheri DOC Superiore is the estate’s top wine, followed by Le Serre Nuove dell’Ornellaia and Le Volte dell’Ornellaia, and the whites Ornellaia Bianco and Poggio alle Gazze dell’Ornellaia. In little over thirty years (the first vintage of Ornellaia was in 1985), the team’s dedication accompanied by optimal geological conditions and microclimate has resulted in critical acclaim and public success within Italy and internationally.

About Masseto – http://www.masseto.com
Masseto is the name of a contemporary legend: one wine, one vineyard, one estate. The potential of the acclivity where the Masseto vineyard stands along the Tuscan coast was glimpsed at the beginning of the Eighties, when the first vines were planted, against all predictions, advice and tradition. The insight proved spot on. The blue clay, refreshing coastal breezes and the superlative refraction of the light guaranteed by the Mediterranean Sea all contribute to the intriguing blend of power, elegance and complexity that distinguishes the wine from the estate. Masseto has enjoyed international acclaim since its inception in 1986.

Since the 2017 vintage, Masseto has been accompanied by the second wine Massetino. Both begin their journey on the Masseto hillslope in 11 hectares densely planted under vine and progress from prized grapes to coveted bottles of wine that refine in the estate’s cellar, designed by architectural firm Zito Mori, which was inaugurated in April 2019. This marks the point of departure for both wines around the world, every autumn, through Place de Bordeaux.