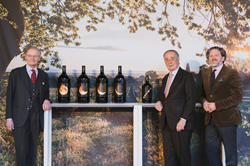 "We have chosen the word "Solare" (which in English translates as “Radiant”) to describe Ornellaia 2017 because it expresses its positive qualities.” - Axel Heinz, Ornellaia Estate Director

“Vintage 2017 was certainly one of extremes, in which frosts, sun and drought captured the imagination. Despite the fact that it was a challenging year for the team in the vineyards and for us winemakers, I am very happy with the high quality and character of this vintage. We have chosen the word "Solare" (which in English translates as “Radiant”) to describe Ornellaia 2017 because it expresses its positive qualities,” explains Axel Heinz, Estate Director of the Bolgheri winery. “To preserve the strong and opulent personality of this wine, we had to apply the utmost care and attention from the vineyard to cellar – more so than in a normal vintage. This careful management of the grapes, starting with an early harvest, has resulted in a harmonious wine in which scents of blackberries and licorice prevail alongside velvety tannins typical of warm vintages. In short I would say that Ornellaia 2017 is sumptuously Mediterranean.”

In line with these words from Axel Heinz, this year’s Vendemmia d’Artista project turns its attention to our planet and the star that illuminates it. The artist chosen to interpret the character of “Solare” is the visionary Tomás Saraceno, known worldwide for his interactive installations that, in this age of ecological upheaval, propose new, more sustainable ways to live.

Sustainability has always played an important role for Ornellaia. The estate itself is a harmonious ecosystem with internal checks and balances that expresses the characteristics of each single plot and its unique terroir. Sustainable viticulture, defined by the conservation and enrichment of our terrain and the landscape in general, is essential to Ornellaia’s production philosophy. Through minimal intervention, we encourage the plants’ spontaneous tendency towards equilibrium. Precision viticulture addresses the specific needs of each parcel, whereas low-impact intervention stimulates the plant’s natural defenses.

Ornellaia 2017 Solare was produced in a year with above-average temperatures, early budbreak, and a sharp dip in temperatures in April that fortunately did not influence the vegetative growth cycle. The proximity of the Bolgheri DOC to the Mediterranean Sea played a decisive role in this vintage and meant that we avoided the spring frosts that struck other parts of Italy. We then moved from one extreme to another with a dry heat spell that lasted from May until nearly the harvest. Luckily, hot and dry summer days were followed by much cooler nights which contributed to the development of Ornellaia 2017’s olfactory complexity.

Inspired by the radiant nature of Ornellaia 2017, Tomás Saraceno looked to the connection between the Sun and the Earth, inviting greater care and attention to the most important source of our planet’s energy. This is the concept behind the artwork developed for the estate and transposed to the unique Salmanazar. PNEUMA 4.21x105 recalls an atomic structure composed of glass spheres which, like clouds, create a suspended city whose form and size are in constant evolution – an expansion of traditional concepts of borders and territories. The suspended sculpture’s forms, as imagined by Saraceno, would be able to float without fossil fuels, powered only by the sun.

Alongside the installation for the estate and the Salmanazar, the artist has also customized 110 large-format bottles and designed a special thermochromic label for the 750ml format, through which he invites us to reflect on the impact that human behavior has on the environment.

As with every year, the 100 double magnums will be sold to avid collectors around the world, meanwhile the unique Salmanazar and the 6 liter Imperials will only be available for sale through an online auction, hosted by Sotheby’s, the profits of which will be donated exclusively to the Solomon R. Guggenheim Foundation’s “Mind’s Eye” program.

“Sotheby’s Wine is delighted to continue our long-term partnership with Ornellaia supporting the 12th edition of their Vendemmia d’Artista project. The 12 lot online auction of the 2017 "Solare" vintage, illustrated by Tomás Saraceno and including many experiences, will open on Sotheby’s online platform, where clients can easily bid through the Sotheby’s app. Similar to last year, we anticipate these lots will attract a truly global roster of bidders who wish to buy these exclusive bottles and enjoy unique experiences.” Jamie Ritchie, Worldwide Head of Sotheby’s Wine.

“Since the inception of Vendemmia d’Artista in 2009, we continue to have the pleasure of supporting leading cultural foundations through celebrating the unique character of Ornellaia,” says Giovanni Geddes da Filicaja, CEO. “In 2019, we embarked on a three-year partnership with the Solomon R. Guggenheim Foundation in New York, which in the first year raised $312,000 for the project through the auction at Sotheby’s. The connection between art and wine remains a passion for many people, ourselves included; we hope that in the years to come we will be able to contribute just as much, if not more, to the Mind’s Eye program through which the Guggenheim assists blind and low vision persons to experience art.”

Donations from the Ornellaia Vendemmia d’Artista auction will advance superb educational programs at the museums in the Guggenheim constellation.

“We offer our sincere appreciation to Ornellaia for their longstanding involvement with the visual arts and their ongoing support of our Mind’s Eye program,” stated Richard Armstrong, Director of the Solomon R. Guggenheim Museum and Foundation. “With the generosity of Ornellaia, we are able to expand the programs that allow us to promote an understanding and appreciation of modern and contemporary art to audiences of all abilities."

The artist Tomás Saraceno will open the Vendemmia d’Artista online auction during the annual event organized by Ornellaia at the Solomon R. Guggenheim Museum in New York on April 30, 2020.

The profits will be announced and donated to the Mind’s Eye program on May 15 when the auction will close on Sotheby’s website, the long-time partner of the Ornellaia Vendemmia d’Artista project.

About Ornellaia - http://www.ornellaia.com
Ornellaia’s philosophy considers the birth of the wines to be the truest expression of their terroir. The grapes for Ornellaia are selected by hand, and picked in the estate's vineyards in Bolgheri, on the Tuscan coast. The varying natures of the estate's terroirs, marine, alluvial and volcanic, are ideal for the cultivation of Cabernet Sauvignon, Merlot, Cabernet Franc and Petit Verdot. The Estate extends over 115 hectares along the Tuscan coast, just a short distance from the medieval hamlet of Bolgheri and the famed cypress-lined avenue ‘Viale dei Cipressi’. The constant work of the Ornellaia team and the ideal microclimatic and geological characteristics have brought the wines great international success since the first vintage of Ornellaia in 1985. In 2001, the 1998 Ornellaia was declared Wine of the Year by the American journal Wine Spectator. In 2011 the German publication Der Feinschmecker awarded Ornellaia its most sought-after award, the ‘Weinlegende’. Ornellaia has received considerable recognition in the national and international press, and is consistently ranked among the top estates by Wine Advocate, Wine Spectator, James Suckling, Antonio Galloni, Bruce Sanderson and the Italian Wine Guides: Gambero Rosso, Espresso, and Veronelli

About Vendemmia d’Artista
Vendemmia d'Artista celebrates the exclusive character of each vintage of Ornellaia. Since the initial release of Ornellaia 2006, Ornellaia has commissioned an internationally-famous contemporary artist to create a work of art for the estate and a series of limited-edition labels, inspired by the character identified by the Winemaker and Estate Director, Axel Heinz, to describe the particular characteristics of the new vintage. 111 large formats, of which 100 3-liter Double Magnums, 10 six-liter Imperials and a nine-liter Salmanazar, are sold or auctioned off by Sotheby’s Wine for charity.

For the 11th edition of the Ornellaia Vendemmia d’Artista project, Ornellaia commissioned American artist Shirin Neshat to interpret the character of the Ornellaia 2016 wine “La Tensione” (Tension); with her disruptive and poetic visual language, the photographer, filmmaker and video-artist alludes to this vintage’s dynamism and strength through the words of the illustrious 11th- century Persian poet, Omar Khayyām. The artist created a site-specific art installation for the Estate, customized a limited series of 111 large format bottles, and designed a special label that, a single example of which, will be found in each Ornellaia case containing 6, 750ml bottles.