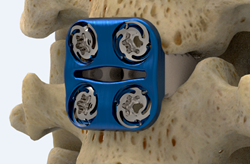 We haven't had a single Invue screw backout since we began utilizing the product.

"The Invue anterior plating system has a twofold screw locking mechanism. The first is a thread-through feature, where both the major and minor diameters of the screw are timed with the plate's screw hole. The second is the connected 'hurricane tabs' (also referred to as locking arms) which snap and lock into place underneath the plate's lip. The dual locking mechanism provides a robust plate-to-screw interface to prevent screw backout, while the connected tab feature provides the user with tactile, visual and audible confirmation of the lock," said SpineFrontier Lead Product Manager Mike Bache.

Dr. Carlson noted, "We haven't had a single Invue screw back out since we began utilizing the product. Prior to using SpineFrontier technology, we generally saw one to two patients annually with a backout issue, which became our expectation regarding results. With the Invue screw, we've fortunately reversed that presumption of patient return."

Dr. Jeffrey Carlson serves as President and Managing Partner of the Orthopaedic & Spine Center in Newport News, Va. He is a board-certified, fellowship-trained spine specialist who focuses on the treatment of injuries and disorders of the spine. He is a thought leader and pioneer in the development and implementation of outpatient spinal surgery procedures and techniques, including Less Exposure Surgery, which is minimally invasive and less traumatic for the patient.

Dr. Carlson received his Bachelor of Science from the University of Maryland and promptly began medical school at George Washington University. Post-graduate training included his residency at Harvard University, and two fellowships.

About SpineFrontier Inc.
SpineFrontier’s mission is to advance the standard of spine surgery through innovative technology. SpineFrontier believes less is more: less time in treatment and recovery is more time in action for patients and surgeons. Headquartered in Malden, Ma., SpineFrontier is a KICVentures portfolio company and the leader in LES technologies and instruments.