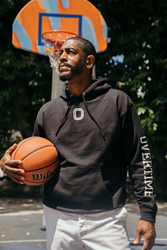 OTE (Overtime Elite) announced today that NCAA Championship coach and 13-year NBA veteran Kevin Ollie has been named as Head Coach and Director of Player Development of the transformative new basketball league. OTE, which was first announced last month, offers the world’s most talented young basketball players a better pathway to becoming professional athletes. Ollie will coach in the league’s inaugural season, which begins in September.

“There is no better fit as coach for what we’re trying to accomplish than Kevin Ollie,” said OTE Commissioner and President Aaron Ryan. “Kevin’s resume speaks for itself, highlighted by a 13-year NBA playing career and winning NCAA championships as both a head and assistant coach. But the respect and admiration he has earned from teammates, players he’s coached, and his coaching peers speak to the impact he will have on the next generation of athletes in preparing them for the pros.”

Ollie brings extensive experience to OTE. He spent six years as head basketball coach of the UConn Huskies, winning the NCAA Championship in 2014 (one of only four African-American head coaches to ever hold that honor, and the only one to win in more than 20 years). Ollie also played 13 seasons in the NBA, most notably for the Philadelphia 76ers, Chicago Bulls and the Cleveland Cavaliers. He has coached Kemba Walker, Andre Drummond, Jeremy Lamb and Shabazz Napier, who became NBA first-round draft picks, and many of his other players went on to professional basketball careers.

“I’m ready to get back to what I was born to do: empowering and encouraging and supporting young people, and helping them grow,” said Kevin Ollie. “There’s no better place for me to do that than OTE, an extraordinary league for extraordinary young men. I consider it my mission to help these elite athletes realize their dreams.”

OTE provides a comprehensive accelerator for elite players’ professional careers. The league - a division of next-generation sports brand Overtime - offers a year-round development program combining world-class coaching, cutting-edge sports science and performance technologies, top-notch facilities, and a rigorous, highly personalized academic program that energizes and enhances each athlete’s journey. Every OTE player will earn a six-figure salary, with a guaranteed minimum salary of at least $100,000 per year, plus bonuses and shares of equity in Overtime. In addition, players will participate in revenue from use of their name, image and likeness, including through sales of custom jerseys, trading cards, video games and NFTs.

Ollie will work hand-in-hand with Brandon Williams, OTE’s EVP and Head of Basketball Operations, to build out a more than 40-person operations staff, including assistant and skill development coaches, sports science and performance experts, trainers, scouts, counselors and advisors. OTE teams will feature a dynamic player roster, competing both within the league and in external competitions against prep and international teams.

“We just got an extraordinary coach and a world-class leader,” said Williams. “In addition to his extensive collegiate and pro experience and championship resume, Kevin has the leadership skills necessary to deliver on our goal: the holistic development of the athlete who is better prepared for the next level.”

About OTE
OTE (Overtime Elite) is a transformative new sports league that offers the world’s most talented young basketball players a better pathway to becoming professional athletes, while engaging and inspiring a new community of digitally native fans.