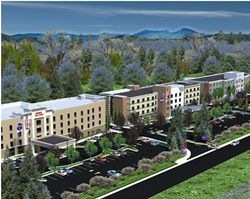 “Travelers love to be awed and surprised by Yosemite’s natural wonders, which include two wild and scenic rivers, waterfalls, granite cliffs and ancient giant sequoias, but they like the familiarity of their favorite hotel brands.” ~ Corry Oakes, CEO of OTO Development

OTO Development is moving into the Yosemite National Park market with the acquisition of two hotels in Oakhurst, California, and a contract on a third.

OTO, which is part of The Johnson Group, has purchased Fairfield Inn & Suites by Marriott Oakhurst Yosemite and Holiday Inn Express & Suites Oakhurst-Yosemite Park Area from a family of independent hoteliers. The seller was represented by Stanley Wang of Marcus & Millichap. The deal also includes Hampton Inn Oakhurst-Yosemite, which is currently under construction.

The three hotels sit adjacent to each other and are located just 13 miles from Yosemite’s South Gate.

“More than 4.5 million people come to Yosemite National Park in a typical year and we’re delighted to now count ourselves among them,” says Corry Oakes, CEO of OTO Development. “This dynamic market has so much to offer, from outdoor adventures to arts and culture to historical interests and more.”

Holiday Inn Express opened February 2020 and Fairfield Inn & Suites, May 2021; the Hampton is expected to open in Q2 of 2022. Collectively this trio represents the only new, branded hotels in easy proximity to Yosemite National Park – indeed, they’re one hour closer to the gate than any other Marriott, Hilton or IHG property.

“Travelers love to be awed and surprised by Yosemite’s natural wonders, which include two wild and scenic rivers, waterfalls, granite cliffs and ancient giant sequoias, but they like the familiarity of their favorite hotel brands,” Oakes says. “Our recently opened and soon-to-open Oakhurst properties offer convenience to the park along with the consistency visitors appreciate from Marriott, Hilton and IHG.”

At four stories each, OTO’s newly acquired hotels in their current configuration have a combined 337 guestrooms and a total of 183,150 square feet; each one has an exercise room, pool and business center. Planned upgrades include replacing four rooms with added meeting space, expanded F&B offerings and enhanced back-of-the-house, so ultimately each of the three properties will be a 111-room hotel. A shared pool amenity is in the design phase.