Since its inception in 2016, the Outback Bowl Charitable Giving Initiative has donated to more than 100 area charities – a total of $1.5 million to 110 organizations. The Initiative has further committed to giving at least $3 million more over the next six years. 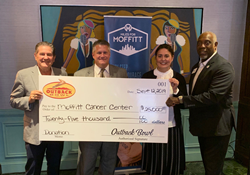 We decided that we wanted to do even more to help the day-to-day lives of local residents. - Outback Bowl President/CEO Jim McVay

With 100 days until the 2020 Outback Bowl, game officials are celebrating a special ‘100’ milestone. Since its inception in 2016, the Outback Bowl Charitable Giving Initiative has donated to more than 100 area charities – a total of $1.5 million to 110 organizations. The Initiative has further committed to giving at least $3 million more over the next six years.

“The Outback Bowl has always been an economic engine for the region and has contributed over $149 million dollars to universities, but we decided that we wanted to do even more to help the day-to-day lives of local residents,” explains Outback Bowl President/CEO Jim McVay. “We began this charitable Giving Initiative to provide much needed funding to the dozens of deserving organizations across Tampa Bay that are meeting the daily needs of the community.”

Organizations that have benefitted from the Charitable Giving Initiative work hard to make the Tampa Bay community better for all residents. Outback Bowl board members have helped select recipients that support children like Big Brothers Big Sisters, Children’s Dream Fund, Wheelchairs for Kids and Chi Chi Rodriguez Youth Foundation as well as organizations that support a variety of adult needs like Meals on Wheels, Feeding Tampa Bay, the Leukemia & Lymphoma Society and Operation Home Front.

The impact on local organizations is profound. “The Outback Bowl has been in our community for more than 30 years and has had a positive impact on our economy and charitable organizations for that entire time,” said Pam Iorio, President/CEO of Big Brothers Big Sisters and former City of Tampa Mayor.

The Bowl boasts the longest college football tradition in the Tampa Bay region with its 34th game to be played on New Year’s Day in Raymond James Stadium. The bowl hosts teams from the Southeastern Conference and Big Ten Conference with a 1:00 P.M. EST kickoff.

“Having long term agreements with Outback Steakhouse, and our conference partners enables us to continue to do helpful things for the region,” adds McVay.

The Outback Bowl looks forward to continuing to support universities, the Tampa Bay economy and local charities for years to come. Learn more about the Outback Bowl’s Charitable Giving Initiative online at http://www.outbackbowl.com/giving-back.

About the Outback Bowl:
The Outback Bowl attracts visitors from more than 40 states each year to join local fans for the game and week of events while generating tens-of-millions of dollars in exposure for the region. The bowl boasts the longest title sponsor in bowl game history with Outback Steakhouse celebrating its 25th year with the game. The bowl has contributed over $149 million to universities over its history and is estimated to have generated more than $1 billion in economic impact for the Tampa Bay area over this time. It has also contributed more than $1.5 million to area charities since 2016 and has committed to paying an additional $45 million to universities and donating at least $3 million more to charities through the 2026 game.