As part of their 35th Anniversary celebration in January, the Outback Bowl has unveiled a commemorative logo for the occasion. 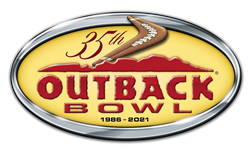 The Outback Bowl has unveiled a special logo in honor of their 35th anniversary.

We are proud to be in position to celebrate the Outback Bowl’s thirty-five-year anniversary in the Tampa Bay community.

The Outback Bowl will celebrate its 35th Anniversary game in January. As it begins new six-year agreements signed last year with title sponsor Outback Steakhouse, TV Network partner ESPN/ABC and the SEC, Big Ten Conference and ACC the popular New Year’s Day college football bowl game in Tampa will be reflecting throughout the year on its many accomplishments towards becoming one of the most popular college bowls in the country and an established Tampa Bay Treasure.

As part of the 35th Anniversary the Outback Bowl has also unveiled a commemorative logo for the occasion.

“We are proud to be in position to celebrate the Outback Bowl’s thirty-five-year anniversary in the Tampa Bay community,” said Outback Bowl President / CEO Jim McVay. “Our commemorative anniversary logo is a wonderful reminder of the numerous contributions the Outback Bowl has made to our region over three and a half decades.”

The Outback Bowl was first played in December of 1986 as the Hall of Fame Bowl and later became the Outback Bowl with the signing of Outback Steakhouse as its title sponsor in 1995. The Bowl attracts visitors from more than 40 states each year to join local fans for the game and week of events while generating tens-of-millions of dollars in exposure for the region and an estimated $30 million in economic impact each year, totaling over $1 billion over its history. And to date the Outback Bowl has contributed over $155 million to universities with an additional $39 million committed over the next six games.

Outback Steakhouse is now the longest title sponsor in college bowl game history entering its 26th year with the game and a contract in place through the 2026 game.

The Outback Bowl Charitable Giving Initiative has distributed $2 million in donations to more than 125 charities since 2016 with an additional $2.5 million more pledged over the next five years.

Along with the impact on area businesses and charities the game has featured many of the sport’s most well-known programs and showcased some of the best players and coaches in the history of the sport.

More than 1.8 million fans have been treated to match-ups such as Michigan vs Alabama (in their first-ever meeting), Penn State vs Florida, Tennessee vs Wisconsin Michigan State vs Georgia and Ohio State vs Auburn. Seventeen games have been decided by one score. Four games were decided by a field goal attempt on the final play. Four were won in the final minute of regulation and four others went to overtime, including the Michigan State vs Georgia triple OT thriller.

Alumni of the bowl have included Drew Brees, Odell Beckham Jr., Alvin Kamara, Hines Ward, Melvin Gordon, Jadeveon Clowney and Kirk Cousins among 980 former players who have gone on to the NFL including 112 first round picks.

“It’s amazing to think of the history we have made in the past 34 years,” adds McVay. “We’ve always worked toward producing a top-quality event and being sustainable for the long term. I believe we have done that and our long-term partnerships with our conferences, ESPN and Outback Steakhouse enables the bowl to continue to make significant contributions to college football and the Tampa Bay area for years to come.”

About the Outback Bowl:
The Outback Bowl attracts visitors from more than 40 states each year to join local fans for the game and week of events while generating tens-of-millions of dollars in exposure for the region. The bowl boasts the longest title sponsor in bowl game history with Outback Steakhouse entering its 26th year with the game. To date the Outback Bowl has contributed over $155 million to universities over its history and is estimated to have generated more than $1 billion in economic impact for the Tampa Bay area. It has also donated more than $2 million to charities since 2016 and has committed to paying an additional $39 million to universities and donating at least $2.5 million more to charities through the 2026 game.