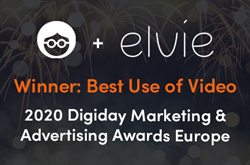 “We’re thrilled to have won the Best Use of Video Digiday Award, alongside Elvie. Smartads targeted more than 900,000 consumers for the brand and was a huge traffic driver,” said Amit Elisha, Vice President of Products at Outbrain.

Outbrain, the world’s leading discovery and native advertising feed for the open web, today announced Outbrain and Elvie were selected by Digiday as the winner of the Best Use of Video for 2020 for the Digiday Marketing and Advertising Awards Europe.

“We’re thrilled to have won the Best Use of Video Digiday Award, alongside Elvie. Smartads targeted more than 900,000 consumers for the brand and was a huge traffic driver,” said Amit Elisha, Vice President of Products at Outbrain. “Winning this prestigious award is an honor, considering that Havas Media and The Wall Street Journal have won in prior years. We are privileged to be included within this category.”

“We’re really proud to have won the Best Use of Video Award, especially as we were up against such great brands. We’ve partnered with Outbrain for over two years now and this campaign was extremely successful at increasing brand awareness for Elvie,” said Lucia Cisneros, Senior Digital Marketing Manager, Elvie.

As a brand with a mission to improve women’s lives through smarter technology, Elvie wanted an advertising partner that would help bring attention to its female-forward products in an effective and engaging manner. Elvie leveraged Outbrain’s retargeting technology to drive conversions lower down the funnel to this pre-educated audience that was already engaged with its content.

With Outbrain’s Video Smartads, combined with proprietary interest and targeting technology, Elvie maximized its creative video campaign by tapping into the reach of the open web. As a result, Elvie reached more than 900,000 engaged consumers for its campaign. Outbrain’s Click-to-Watch solution proved its power as an ideal format for deeper storytelling and ensuring a 100% engaged and opted-in audience.

To learn more about Elvie’s work with Outbrain, please visit our case study.

About Outbrain
Outbrain is the world’s leading discovery and native advertising feed for the open web. A third of the world’s Internet-connected population explore and discover information through our feed technology, which is trusted by emerging to established brands and integrated into thousands of media companies’ tech stacks to manage and monetize their publishing operations. Outbrain operates in 55 countries and is headquartered in New York City with offices in 18 cities worldwide. Learn more at http://www.outbrain.com or follow us on Twitter, LinkedIn, and Instagram.

About Elvie
Founded in 2013, Elvie is a British brand developing smarter technology for women.
After realising the lack of support for new mums, CEO Tania Boler brought together a team of world-class engineers, designers and business minds to redesign the existing unattractive and outdated medical devices in women’s health into sleek consumer products that could be used at home.

Elvie now has four products on the market. The first to launch, Elvie Trainer, is an award-winning Kegel trainer and app. Its second product, Elvie Pump, is the world's first silent, wearable breast pump.

The newest additions to the line-up are Elvie Curve and Elvie Catch; both enhancing the Elvie breastfeeding range. Elvie Curve is a wearable, silicone breast pump that uses natural suction to enable comfort and Elvie Catch is a set of two secure milk collection cups to catch leaks and collect additional milk.