With musicians directly suffering a major blow with canceled tours due to the COVID-19 global pandemic, Colorado Springs outlaw blues and trash-grass pioneers Tejon Street Corner Thieves have found a new way to get their music directly to fans via drive-by performances. The band have been using their tour bus and a P.A system to drive through fans neighborhoods to promote their new single "Lay Low". 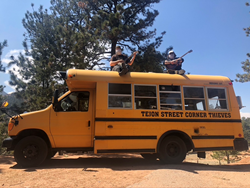 With musicians directly suffering a major blow with canceled tours due to the COVID-19 global pandemic, Colorado Springs outlaw blues and trash-grass pioneers Tejon Street Corner Thieves have found a new way to get their music directly to fans via drive-by performances. The band have been using their tour bus and a P.A system to drive through fans neighborhoods to promote their new single "Lay Low". The band has been connecting through performances inside their tour bus while fans take in the music sitting on their porch in an effort to practice safe social distancing. Since the news broke of the band making pitstops through fans' neighborhoods, Tejon Street Corner Thieves has received hundreds of requests via their Facebook page for additional tour stops.

The Tejon Street Corner Thieves released their new single "Lay Low" online earlier this week. Recorded at Royal Recording in Colorado Springs, Colorado under the watchful eye of producer Bill Douglas, "Lay Low" bottles up the feelings of being defeated by life and unites listeners with an infectious sing-along chorus that finds the solace inside the darkness. The single is the first taste of new music from the band's upcoming new EP "Demons", which is slated for a May 14th release date on a new label called Liars Club formed by Danny Kiranos PKA Amigo the Devil and indie powerhouse Regime Music Group.

"Our tour was booked and we were excited to go out and play for fans every night on the road. Then the coronavirus spread across the country and every music venue in the country shut down, causing us to cancel the tour," commented Connor O'Neal from Tejon Street Corner Thieves. "We got messages from fans saying how bummed out they were that our show had been canceled. We have a small P.A system inside our tour bus that we use while we're on the road, so we thought it would be fun to drive to a couple of fans' houses and bring the show to them. It just grew from there and we've been able to stay connected with our fans during this pandemic without actually coming into contact with them. We don't want people to come up to the bus or gather together, but they can sit and listen from their front steps. The safety of our fans is important to us, so we've told everyone to keep it limited to the people you live with and we've been only playing two songs to ensure that fans don't gather and potentially spread this virus further.”

“Excited about the first signing to the newly formed label being Tejon. Great music, great people, and clearly the commitment that they have to the music and their fans is incredible. Re-working how live music is delivered to people and literally risking their own health to put a smile on peoples faces during these crazy times shows you the kind of people they are,” said Zinger.

Amigo the Devil added, “It’s a very rare and fortunate opportunity to find a band that is as much of a powerhouse in a live setting as they are while listening at home, alone, dancing, and shouting out the completely un-avoidable and wildly infectious sing-alongs. I knew from the moment we played a show with Tejon for the first time that it was something special and it’s an honor to have them as the first addition to the family we’re expanding into. This group, this label, this whatever you want to call it is a goal I’ve had to build something in unity where we all feel confident and comfortable to be ourselves and know that we aren’t at all alone in our strangeness. There’s no one more fitting than Tejon Street Corner Thieves to be a part of it and we’re grateful they’re on board. They’re just such good dudes too, it’s unreal haha.”

The Tejon Street Corner Thieves hail from the Colorado Rockies and forged their original brand of whiskey roots from the ground up. Honing their craft on the streets, they swiftly gained recognition from the music community with Colorado Springs Gazette awarding the band with their “Best of the Springs” award, the Pikes Peak Art Council hailed the group as “Best In Show” in 2017, and in 2018 the Colorado Springs Independent dubbed them “Best Original Band”. As a nationally touring act, the band has become notorious for their shenanigans and over the top live performances. The Tejon Street Corner Thieves consistent show schedule and heart filled showmanship have captured the hearts of fans and created a cult-like following.