Over a Decade After Katrina, Racial Inequities Resurface in Federal Response to COVID-19 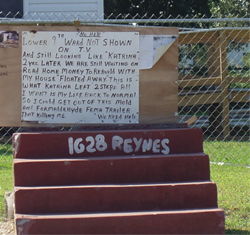 To inspire support for public health directives, many warn COVID-19 does not discriminate—everyone’s susceptible. The reality is more complicated. We are not “all in this together.” Racism ensures this, and New Orleans’ experience following Hurricane Katrina illustrates one way that racial inequities play out in times of crisis.

In a report released today by the National Education Policy Center, From Katrina To Covid-19: How Disaster, Federal Neglect, and the Market Compound Racial Inequities, professor Kristen Buras of Georgia State University draws on history, storytelling, and political analysis to describe how the government neglect that disproportionately affected communities of color during Katrina is again evident during the COVID-19 crisis, with similar devastating results.

On August 29, 2005, Katrina struck New Orleans with disastrous effects. Yet while Katrina is regarded as one of the worst natural disasters in U.S. history, Buras argues that government neglect and market-driven public policy generated the worst effects, especially for communities of color. Despite forecasts that Katrina could kill tens of thousands, federal, state, and local governments did little to protect those in geographically vulnerable neighborhoods or evacuate those without cars. In New Orleans, African Americans were left to drown in floodwaters and dehydrate on rooftops, disproportionately suffering an array of harms.

But the harms did not end there. As floodwaters receded, policies aimed at privatizing assets in African American neighborhoods, including public schools, were enacted, compounding racial inequities wrought by a history of white supremacy.

Almost 15 years later, on January 20, 2020, the first U.S. case of COVID-19 was detected. Despite warnings that a pandemic could wreak physical and economic havoc, the federal government failed to take preventative action. As a result, communities of color are again suffering disproportionately, with African Americans and other racially marginalized groups overrepresented among those who have died from the virus. Yet states have been slow to produce racially disaggregated data or provide racially targeted healthcare and other support. Instead of coordinating a federal response to the crisis and corresponding disparities, policymakers have advocated free market solutions, leaving states to compete for lifesaving medical supplies. The CARES Act, ostensibly passed to assist vulnerable communities, has been used to consolidate the wealth of corporate elites.

Katrina and COVID-19 have been framed as “natural” disasters—one ecological and the other biological—but Buras contends that government inaction and racism have been most responsible for the disproportionate harms experienced by communities of color. With COVID-19, African Americans and other marginalized communities risk infection as low-paid workers, struggle to access food and healthcare, worry about rent and eviction, confront a digital divide amid shuttered schools, and die at higher rates.

The experience of Katrina, then, has policy implications for the current moment, including concerns over profiteering and who will have a voice in rebuilding communities disproportionately affected by economic shutdowns and school closures.

Professor Buras ends her report with race-conscious, equity-focused policy recommendations spanning health, education, housing, labor, and democratic governance. These are necessary, she concludes, to realize an equitable future and hold accountable those whose negligence has inflicted and compounded harm for communities facing the crisis of not only COVID-19, but racism.

Find From Katrina To Covid-19: How Disaster, Federal Neglect, and the Market Compound Racial Inequities, by Kristen L. Buras, at:
http://nepc.colorado.edu/publication/katrina-covid