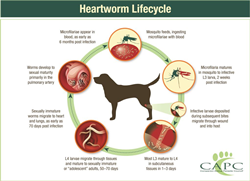 It takes just one heartworm-infected dog to become a reservoir of infection, increasing the number of infected mosquitoes and ultimately spreading the heartworm parasite to unprotected dogs and cats.

It’s our hope that the monthly CAPC Top 10 Cities Heartworm Report — along with our 30-day Parasite Forecast Maps — will prompt important conversations between pet owners and their veterinarians about heartworm protection.

The Companion Animal Parasite Council (CAPC) — the nation’s leading source on parasitic diseases that threaten the health of pets and people — today issued the CAPC Top 10 Cities Heartworm Report for the month of March with Overland Park, Kansas, topping the list. In its mission to continuously monitor and report emerging threats to companion animals, CAPC recently launched its new monthly report initiative to alert pet parents, veterinarians, and pet-related service providers about U.S. metropolitan areas experiencing the highest percent increases in positive heartworm tests in dogs and cats in the last 30 to 45 days.

During March 2019, these 10 U.S. cities had the highest percentage increase in positive heartworm tests:

Pets in this month’s CAPC Top 10 Cities Heartworm Report may have been exposed locally or travel-related exposure may have been a contributing factor. Other factors include transporting of shelter dogs, pet owner compliance in administering monthly heartworm preventatives, changing weather patterns and mosquito microclimates.

In addition to the cities in CAPC Top 10 Heartworm Report, many other communities also are experiencing increases in heartworm prevalence. To help pet parents and veterinarians monitor heartworm prevalence in their community, CAPC provides a monthly, county-by-county Heartworm disease forecast (https://petdiseasealerts.org/).

ABOUT CAPC
The Companion Animal Parasite Council (http://www.capcvet.org) is an independent not-for-profit foundation comprised of parasitologists, veterinarians, medical, public health and other professionals that provides information for the optimal control of internal and external parasites that threaten the health of pets and people. Formed in 2002, CAPC works to help veterinary professionals and pet owners develop the best practices in parasite management that protect pets from parasitic infections and reduce the risk of zoonotic parasite transmission.