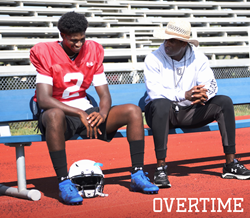 Star quarterback Shedeur Sanders and his father, Deion Sanders, have a new series on Overtime

This slate of five new series –showcasing many of the sport’s most exciting players and teams– represents a dramatic expansion of Overtime’s football programming. The first episode of “Primetime 2.0” premieres this Saturday, October 12th, at 12pm ET/11am CT/9am PT, with new episodes posting every other week.

“I'm excited that Overtime decided to go PRIMETIME!” said Deion Sanders. “This will be true entertainment that meets old-school coaching and accountability of high school football athletes. It's our calling to get them to and through college and win State on the way.”

“We’ve seen a huge spike in our football audience and in the amount of time fans spend watching our football content,” said Marc Kohn, Overtime’s chief content officer. “The next generation of sports fans are looking for something much different from what they’ve been given -- and we are happy to deliver that for them with this new slate of shows. Nobody is creating longer-form, episodic shows for Gen Z at the volume and engagement we are.”

This launch caps a year of substantial growth for Overtime, which is growing more quickly and whose video content has significantly higher engagement than any other sports media brand. Overtime now has nearly 15 million followers across Instagram, Snapchat, Twitter, YouTube, Facebook and TikTok. That overall audience has quintupled in size over the past year, and on Instagram, Overtime’s audience has doubled in just eight months. Overtime has seen similar growth in consumption of its programming; its videos are now viewed more than 920 million times a month on average, up from 145 million monthly views in January 2018.

“King of Friday Night” will give football fans an inside look at Parish Episcopal School junior Preston Stone and the attention and pressure that comes with life as a top-ranked high school quarterback in football-loving Texas. Stone, the second-ranked dual-threat QB in the Class of 2021, holds more than 50 Division I scholarship offers, including Alabama, Ohio State and Notre Dame.


Deion Sanders might be one of the most famous players in the history of the NFL, but in Cedar Hill, Texas, he’s just known as “Coach Prime.” Deion is the offensive coordinator at Trinity Christian High School, where his son Shedeur is the starting quarterback. This fall, Overtime is going all-access with the Sanders as they try to lead the Tigers to a state championship. The show will feature exclusive footage from inside the Sanders home and Trinity’s locker room, as well as on the sideline and in the huddle during games.


Jalen Suggs is a rare elite high school athlete with two major life decisions to make: not only does he need to decide where he’s attending college, he also needs to decide what sport he wants to play at the next level. Suggs is a 5-star basketball player and 4-star football player, with countless Division I offers for each sport. “Dual Threat” will document Suggs’ football season as he wraps up a decorated high school career at Minnesota’s Minnehaha Academy and faces the biggest decision of his life: where to attend college, and what sport to play.


“Bunchie!” will showcase the life of 12-year-old football phenomenon Maxwell “Bunchie” young. Bunchie is known for his incredible footwork and unmatched speed, and already holds multiple scholarship offers even though he just started 7th grade in Los Angeles. The series will take football fans inside the life of America’s youngest football star.


“To The House: The Coach Who Never Punts” is a full-season documentary-style series featuring Kevin Kelley (aka the Coach Who Never Punts) and his Little Rock, Arkansas school, Pulaski Academy. Kelley has become famous in football circles for his revolutionary strategies: he doesn’t punt (yes, he goes for it on every 4th down), goes for 2 after every touchdown, and onside kicks for every kickoff. The show will provide in-depth explanations from Kelley on his football strategies and why they’re so effective.