“Designed Illusions: Via Divine Power” from Christian Faith Publishing author P J Ricchiuti is a unique account of the authors life beginning with his first memory in 1944 and leading through a series of spiritual moments that shaped reality. 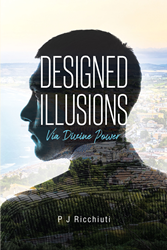 Ricchiuti writes, “Giving constant thoughts of my time in Vasto, Italy, 1945, at seven years old, I always ventured in part of Vasto town. I saw not a single person or activity. Eventually, I made my way toward a large body of water, much later known to me as Adriatic Sea. I stood there, still saw no one or activity, not a single ship or vessel. I knew nothing of World War II. Then the war either still active or about to end.
As I was about to go backward, metal wheels alerted me that I would finally see someone. Scooter Boy, about my age, stopped in front of me. We spoke, but it led nowhere. I never saw him again. I was alone again. The scooter boy and I spoke a foreign language—English. I didn’t know that I shouldn’t speak English. It would be my only language ever.
On my own, I was always barefoot but never felt any discomfort and never gave it a thought. I never ate anything, never had an appetite, and thus never had a toilet break. I didn’t know anything of a toilet. I proceeded on without normal sense. My time in Vasto was always a sunny day. A drop of rain had never fallen on me. All per divine power. Then I didn’t know it but had my suspicions. Now when I think of the Adriatic Sea, I don’t see just an empty large body of water. Now I know of a violent world of a time gone by. I’m totally aware of the horror of the mass murder of men, women, and children in most of the countries across where I had stood looking out at an empty sea.”

Published by Christian Faith Publishing, P J Ricchiuti’s new book is a fascinating and nostalgic walk through the authors life.

Offering readers an intimate look into private encounters with the divine, Ricchiuti offers a series of compelling occurrences for the readers consideration.

View a synopsis of “Designed Illusions: Via Divine Power” on YouTube.

For additional information or inquiries about “Designed Illusions: Via Divine Power”, contact the Christian Faith Publishing media department at 866-554-0919.