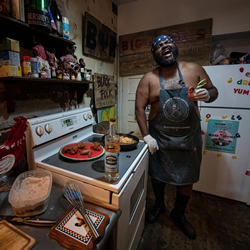 We’ve all been stripped down to our core these last seven months — as people, as business owners, and as a country — and we witnessed our subjects literally remove their inhibitions and anxiety as they removed their clothes for this revival.

As we were approaching 2020, Scott and Don Avellino, who produce a variety of seasonally-focused Revivalist Gin and Resurgent Whiskey just outside of Philadelphia, were looking to do something different to get the word out about their award-winning products.

Fast forward to this summer, and the two brothers found an advertising campaign from just over 20 years earlier which saw a number of chefs bare it all to showcase Vitamix blenders. To keep with their product name, they decided a 'revival' would be just what was needed during a time when the country could use some thought-provoking laughter while raising a glass to the American spirit.

"In the midst of COVID hitting, we wanted to do something fun — something out of the box that would turn heads, put a smile on people's faces, and get them to forget about everything else for a moment," said Scott Avellino. "This seemed fun and light-hearted, and even though it had been done once before, our name is literally Revivalist, so we decided to run with it and revive it. We feel that the images really capture the American spirit during difficult times, as these chefs are all struggling through the pandemic like the rest of us, but when they took their clothes off and enjoyed some of our product they seemed to let loose."

The Avellino Brothers did some research, and found several local chefs who were interested in stripping down to their birthday suits for some product shots. It was done with class, artistically, and with a focus on Revivalist's gin line, which was just recognized as the winner of USA Today's 10Best survey as the 2020 Readers' Choice for Best Craft Gin Distillery.

The chefs include Joel Singer of Barry's Buns (The Bourse and Chestnut Hill Farmer’s Market), who has worked in the Philadelphia culinary scene since 1999; Keith Taylor of Zachary's BBQ & Soul Kitchens (Elmwood Park Zoo), who recently appeared on Food Network’s Guys Grocery Games with his son, Zachary; Reuben "Big Rube" Harley, a pop-up chef, photographer and beloved “fried chicken master” who helped put Mitchell & Ness on the map at the turn of the 21st Century; and Hilary Hamilton of Jasper's Backyard and Jasper’s West Side (101 E. 7th Avenue and 101 Ford Street in Conshohocken), who worked under Nick Elmi at Chef Georges Perrier’s heralded Le Bec-Fin before it closed in 2012.

Kevin York, a Philadelphia-based photographer of 35-plus years, photographed all of the subjects, who were positioned next to various Revivalist Gin bottles. York, who specializes in portraits, has been published worldwide, and has worked for Racer Magazine and ESPN the Magazine. His work can be found by visiting http://kyorkphoto.com.

"We’ve all been stripped down to our core these last seven months — as people, as business owners, and as a country — and we witnessed our subjects literally remove their inhibitions and anxiety as they removed their clothes for this revival," said Don Avellino. "We are thrilled with how the photos turned out, and everyone was very comfortable and had a lot of fun shooting this. We are very excited to unveil this to everyone."

Since all of the aforementioned photos will be shared across social media platforms, the Avellino Brothers will be donating $1 for every share on Facebook, as well as $1 for every repost on Instagram (up to $5,000) to the Hospitality Assistance Response of Pennsylvania (HARP), a 501(c)3 which provides immediate emergency funding to hospitality workers.

The original Vitamix naked chefs promotion from 1999 included a number of top chefs, including Marcus Samuelson, David Burke and Philadelphia's own Marc Vetri.