The latest work, of Darrin Pagnac, Ph.D., “Dinosaurs: A Catalyst for Critical Thought,” shows that passion for dinosaurs, when properly directed, can trigger interest in science and be used to develop critical thinking skills. 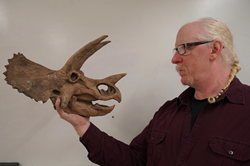 Darrin Pagnac, Ph.D., holds a model of a Triceratops skull.

A citizen possessing acute critical thinking skills is best equipped to appreciate the value of science to society.

Since the mid-1800s dinosaurs have been a source of fascination and inspiration — from children’s coloring books to Hollywood blockbusters, these extinct animals hold a unique place in the American psyche. The immense popularity of dinosaurs also makes them an excellent conduit for teaching the critical thinking skills needed in basic science and engineering literacy.

Darrin Pagnac, Ph.D., is a South Dakota School of Mines & Technology associate professor of geology specializing in paleontology. His latest work, “Dinosaurs: A Catalyst for Critical Thought,” published by Cambridge University Press, shows that passion for dinosaurs, when properly directed, can trigger interest in science and be used to develop critical thinking skills.

Each spring Pagnac teaches a course called “Dinosaurs,” which attracts a wide range of students from various fields of study. “We have a number of students who get fired up emotionally about dinosaurs,” he says. In this class, Pagnac helps students confront preconceived notions that he calls “Jurassic Park Syndrome.” This is where student’s views of paleontology and sciences are shaped by misconceptions and inaccuracies in pop-culture. Pagnac helps students challenge their own beliefs about dinosaurs and in the process he helps them build critical thinking skills useful in consumption of media across the board.

Pagnac points out that the actual stories behind scientific discovery are often every bit as inspiring as the misconceptions reinforced by pop-culture and science-fiction. “We now know what color some dinosaurs were,” he says. “I never in my lifetime thought we could have discovered this,” says Pagnac. “The way we came about this knowledge, through the rigorous science of exploring and identifying microstructures in dinosaur feathers to discern color, is amazing. It’s better than anything Jurassic Park could present.”

Pagnac encourages other science and engineering teachers to employ critical thinking skills to deconstruct preconceived notions that are reinforced by pop-culture in their own fields.

He says critical thinking skills make students better citizens, writing, “A citizen possessing acute critical thinking skills is best equipped to appreciate the value of science to society, can recognize false or manipulative claims, and will attune their information assessment ability not just to an interest in dinosaurs but also to the important societal issues we all face.”

Pagnac will present his work at an upcoming STEAM Café at 6 p.m. MST Tuesday, Jan. 15, at the Hay Camp Brewing company in downtown Rapid City. The talk will be shown live and archived on SD Mines’ YouTube site here.