A changing economy has resulted in an impressive group of divorce attorneys in Palm Beach who are proactively helping their clients by adapting to these changes with the CFL™ designation. 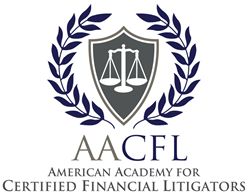 The organization’s mission is to solve a growing problem in the divorce world – a rapidly changing economy.

The CFL™ designation has taken Palm Beach by storm with the recent launch of the American Academy for Certified Financial Litigators (AACFL) Palm Beach Chapter in December of 2019. The AACFL is proud to announce the creation of this chapter and applauds the commitment of its Founding Members. The organization’s mission is to solve a growing problem in the divorce world – a rapidly changing economy.

A common path for these attorneys is to study liberal arts at the undergraduate level, then to go to law school, and then to be fighting for their clients’ financial future without any formal financial training. The mission of this group is to fix that problem because of how complex today’s financial economy has become. A solid understanding of the financial fundamentals taught in the CFL™ Training course can make the difference between an attorney’s client struggling after their divorce and the client being able to start the next chapter of their life with more financial security for their family. While years of experience as a divorce attorney is undoubtedly valuable, imagine the power and benefit to clients of combining that legal knowledge with enhanced financial knowledge!

An additional goal for the group is to raise the level of financial knowledge in the family law community, freeing up the judge’s schedules from having to deal with these matters. This will allow judges to spend more time on areas such as domestic abuse, custody problems, and other important, non-financial, family matters. The organization believes that this is a goal that society would benefit from greatly.

The uniqueness of the CFL™ designation and training program is that it was developed by nationally recognized financial firms, financial experts, attorneys and judges who believe in the mission. To create public confidence, the CFL™ designation is only awarded to members of the AACFL who have taken the time to study and receive a passing grade on an objective, comprehensive exam covering these concepts. Not all divorce lawyers would make the commitment of time and effort to obtain and prove their knowledge in these areas. The AACFL seeks to publicly recognize the dedication of these Founding Members and will be indicating those who have earned the designation on their Palm Beach Chapter website, available for public viewing: http://www.aacfl.org/chapter-pb/

The AACFL is hopeful that this trend will continue in South Florida and that its mission of helping the public and the court system will be achieved through the dedication of its members. Currently, the Founding Membership represents some of the finest divorce attorneys and firms in Palm Beach. The organization has been growing rapidly and currently has membership in over ten states. Congratulations to the following Palm Beach Founding Members!