Palm Beach Opera presents Giacomo Puccini’s “Madama Butterfly,” one of the world’s most popular operas, on Jan. 20-22 at the Kravis Center for the Performing Arts. 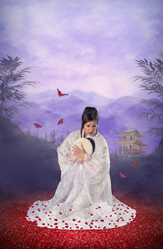 “We believe there is still much to be learned from ‘Madama Butterfly,’ and we aim to celebrate its beauty while continuing to reflect on how it resonates with us today.”

The first mainstage production of the 2023 Season, “Madama Butterfly” features heart-wrenching drama, a timeless story and a haunting score. Widely considered one of the greatest operas of all time, “Madama Butterfly” tells the story of a young geisha who falls in love with an American sailor in 19th-century Japan. Their cultures collide in a sweeping love story that leaves a trail of broken promises.

Acclaimed Italian conductor Carlo Montanaro will lead the orchestra, and American stage director Alison Mortiz, known for her innovative interpretations, will lead the cast. Sharing the role of Cio-Cio-San are sopranos Jennifer Rowley, last seen at PBO as Hanna in "The Merry Widow," and Toni Marie Palmertree (Jan. 21), who recently debuted at the Metropolitan Opera. Notably, Rowley will also mark her role debut in this production.

Starring as Pinkerton will be tenors Jonathan Burton and Robert Watson (Jan. 21), both recent PBO artists. Burton performed as Don José in PBO's "Carmen" in 2022, and Watson, a former Benenson Young Artist, performed as Canio in the company's 2021 Festival performance of "Pagliacci."

Mezzo-soprano Renee Tatum, celebrated for her "gleaming vocalism" by Opera News, will perform as Suziki, and baritone Troy Cook, who recently debuted at London's esteemed Royal Opera House, will sing the role of Sharpless. Montanaro, Mortiz, Palmertree, Tatum, and Cook will all mark company debuts in this production.

“To ensure we are maintaining the delicate balance between honoring operatic tradition and respecting Japanese culture, PBO is collaborating with cultural consultant Satomi Hirano, the Morikami Museum and Japanese Gardens, and stage director Alison Moritz, who was specifically selected to direct this piece because of her experience with the work and her alignment with PBO’s initiative. We are embracing the opportunity to dive into everything from the costumes to the set to produce and experience this masterpiece with a new perspective,” said General & Artistic Director David Walker. “We believe there is still much to be learned from ‘Madama Butterfly,’ and we aim to celebrate its beauty while continuing to reflect on how it resonates with us today.”

“Madama Butterfly” will be sung in Italian with English supertitles projected above the stage. Single tickets start at $25 and season subscriptions start at $60. Tickets are available online at pbopera.org or by calling the box office at 561-833-7888.

Palm Beach Opera is dedicated to producing live opera at an international standard of excellence, enriching the lives of the communities it serves with a diverse offering of educational programs, and training the next generation of opera stars. Founded in 1961, the fully professional Palm Beach Opera presents main-stage performances at the Kravis Center for the Performing Arts in West Palm Beach and is a proud member of OPERA America and the Cultural Council of Palm Beach County.