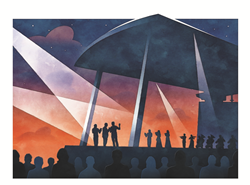 “We are thrilled to present our first-ever outdoor festival and provide opera lovers coming from across our nation with an opportunity to enjoy performances from some of our industry’s most important artists,” said General Director David Walker.

“We are thrilled to present our first-ever outdoor festival and provide opera lovers coming from across our nation with an opportunity to enjoy performances from some of our industry’s most important artists,” said General Director David Walker. “Our 2021 Festival has shaped up to be a veritable who’s who in opera – one not to be missed – and we hope our safe, unique, and open-air festival brings much-needed hope, healing, and excitement to our entire community this coming season.”

Praised as “richly talented” by the New York Times, Latonia Moore, who made her operatic career debut with the Palm Beach Opera and has been a regular at the Metropolitan Opera since her “radiant” debut as Aida, will sing the role of Mimì in “La bohème.” Moore last appeared at PBO as Cio-Cio-San in “Madama Butterfly.”

Winner of the Marian Anderson Award, Janai Brugger will sing the role of Pamina in “Die Zauberflöte.” Highly regarded for her exquisite tone and moving characterizations at major companies, her singing was recently featured on HBO’s “Lovecraft Country,” and she last appeared at Palm Beach Opera as Susanna in “Le nozze di Figaro.”

Kathryn Lewek will make her PBO debut in “Die Zauberflöte,” performing as the famed Queen of the Night, a role she has performed for 7 seasons at the Metropolitan Opera and over 250 times worldwide. She regularly appears at the world’s leading opera companies and has been celebrated as a “mysterious force of nature” by the LA Times.

Ana María Martínez is one of the most celebrated sopranos of her generation and is well-known for regular concert tours worldwide with Plácido Domingo. She last appeared at Palm Beach Opera as Hanna Glawari in “The Merry Widow,” and returns to sing Nedda in “Pagliacci,” a role she has also recorded on Decca with Andrea Bocelli.

Having appeared in more than 150 performances at the Metropolitan Opera and performed with esteemed companies such as the Paris Opera and the Vienna State Opera, two-time Grammy award winner and Richard Tucker Award winner Isabel Leonard will make both her role and company debut starring as Musetta in “La bohéme.”

One of the most in-demand tenors in the world, Matthew Polenzani has appeared at the Metropolitan Opera in over 300 performances and will sing Tamino in “Die Zauberflöte” for his Palm Beach Opera mainstage debut. He is a winner of the Richard Tucker Award and headlined Palm Beach Opera’s Gala in 2019.

Internationally renowned for his passionate performances, Michael Fabiano will make his company mainstage debut as Rodolfo in “La bohème.” One of the world’s leading tenors, Fabiano has appeared in several Live in HD performances from the Metropolitan Opera. A Richard Tucker Award winner, Fabiano headlined Palm Beach Opera’s Gala in 2017.

Hailed by the Dallas Morning News for a voice of “baritonal richness in the lower register and a fine blaze on top,” former PBO Benenson Young Artist Robert Watson makes his role debut as Canio in “Pagliacci.” Since completing his training with PBO, he has excelled as a leading tenor at the Deutsche Oper Berlin and was scheduled to make his Metropolitan Opera debut this spring.

Acclaimed Verdi baritone Quinn Kelsey will sing Marcello in “La bohème.” Kelsey, who will make his PBO debut, regularly sings at the Metropolitan Opera and the Lyric Opera of Chicago, and his performance of Marcello has been celebrated as a “subtle, heartbreaking bit of sorcery” by the San Francisco Chronicle.

Recognized for his “vigorous yet velvety sound” by The Globe and Mail, Joshua Hopkins will make his company debut as Papageno in “Die Zauberflöte” and as Silvio in “Pagliacci.” The Operalia Competition winner is a regular at the Metropolitan Opera, the Lyric Opera of Chicago, Houston Grand Opera and Washington National Opera.

Palm Beach Opera audience favorite Michael Chioldi returns to perform Tonio in “Pagliacci.” One of the most sought-after dramatic baritones of his generation, Chioldi has performed on some of the world’s most important stages and has been praised for his "warm, rich tone” by Opera News. Chioldi last appeared at PBO as Scarpia in “Tosca.”

Called a “showstopper” by the New York Times for his performance of Colline at the Metropolitan Opera, Ryan Speedo Green makes his PBO debut in the same role in “La bohème” and as the Speaker in “Die Zauberflöte.” A member of the Vienna State Opera, the story of his personal and artistic journey, “Sing for Your Life,” is a New York Times bestseller.

With a rich, sonorous voice and imposing figure, Morris Robinson appears as Sarastro in “Die Zauberflöte,” a role he has performed for 7 seasons at the Metropolitan Opera. One of the leading basses in the world, his previous performances at Palm Beach Opera have included Verdi’s “Requiem” and Beethoven’s “Ninth Symphony.”

One of the true legends of opera, Samuel Ramey will make his PBO debut as Benoît/Alcindoro in “La bohème.” For decades, Ramey has performed on the world’s most important stages alongside opera’s most distinguished artists, and with over eighty commercial recordings, he is the most-recorded bass in history, having won three Grammys.

PBO Chief Conductor David Stern will return to conduct both “La bohème” and “Die Zauberflöte.” Acclaimed for his riveting performances with the company since his debut in 2014, Stern is also the founder and director of the Paris-based opera company, Opera Fuoco, and the former Music Director of the Israel and St. Gallen Opera houses. He has also led performances at the Festival d’Aix-en-Provence and English National Opera.

Conductor Patrick Summers will make his PBO debut leading “Pagliacci.” The Artistic Director of Houston Grand Opera, he has been a guest conductor at many of the world’s leading opera houses, including a long association as Principal Guest Conductor of the San Francisco Opera. The Co-Artistic Director of Aspen Opera Theatre with Renée Fleming, Summers has conducted over twenty world premieres and appears on more than a dozen recordings.

Director James Robinson makes his PBO debut directing all three festival operas. The Artistic Director of the Opera Theatre of Saint Louis, Robinson regularly directs at prestigious opera houses such as the San Francisco Opera, Houston Grand Opera, and Santa Fe Opera. His acclaimed production of “Porgy and Bess” returns to the Metropolitan Opera next year, where he also opens the season with a new production of “Fire Shut Up in My Bones.”

PBO’s outdoor festival replaces its traditional season at the Kravis Center for the Performing Arts. The performances will also feature the Palm Beach Opera Orchestra and Chorus. All performances will feature socially distanced singers, orchestra, and chorus members, as well as large screens to display close-ups of the performance. Attendees can also enjoy a variety of food and beverages purchased at the amphitheater throughout the event.

The festival schedule includes live, semi-staged performances of “La bohème” on Feb. 19 and 24, “Pagliacci” on Feb. 23 and 27, and “Die Zauberflöte (The Magic Flute)” on Feb. 21 and 26. All performances will take place at 7:30 p.m. with the exception of the Sunday matinee performance, which will take place at 2 p.m. “La bohème” and “Pagliacci” will be sung in Italian and “Die Zauberflöte (The Magic Flute)” will be sung in German, all with English supertitles projected.

Palm Beach Opera continues to work closely with the iTHINK Financial Amphitheatre, reviewing every safety aspect of the experience including social distanced and limited seating, enhanced protective and sanitation measures, clearly marked pathways and wayfinding throughout the event, and a contactless ticketing system.

Palm Beach Opera is dedicated to producing live opera at an international standard of excellence, to enriching the life of the communities it serves with a diverse offering of educational programs, and to training the next generation of opera stars. Founded in 1961, the fully professional Palm Beach Opera presents main stage performances at the Kravis Center for the Performing Arts in West Palm Beach and is a proud member of OPERA America and the Cultural Council of Palm Beach County.