More people are cooking at home, and plan to continue post-pandemic as their skills increase; half partook in a pandemic food trend, with banana bread topping the list 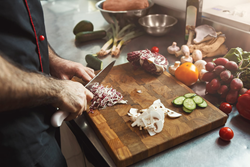 There is no doubt that the pandemic has impacted nearly every aspect of our lives, but spending more time in the kitchen is perhaps one that will prove to be beneficial in the long run.

New research from Rouxbe, the leading online culinary school, found that over the past year, the pandemic has turned more Americans into home chefs. Based on survey responses from 1,000 individuals, nearly 7 in 10 (69%) cook at home four or more nights a week, compared to 56 percent who said the same in 2019. The number of people who said that they never cook has declined from 12 percent in 2019 to less than 2 percent today.

“There is no doubt that the pandemic has impacted nearly every aspect of our lives, but spending more time in the kitchen is perhaps one that will prove to be beneficial in the long run,” said Ken Rubin, Chief Culinary Officer at Rouxbe. “Becoming more comfortable cooking for ourselves is a gift that will remain, and we hope more people will recognize that foundational cooking skills are the key to confidence in the kitchen.”

Post-pandemic, a quarter (27%) believe they will continue to cook more from home than they did previously. The top reasons for this shift include:

While many have improved their skills, there is room for improvement. The top three areas individuals would like to improve include making healthy meals, making quick meals and baking. In terms of specific meals, dinner ranked first for what most people want to get better at preparing, followed by lunch to take to work/school and desserts.

The pandemic itself affected age groups differently, including what people felt safe doing, which impacted the time spent cooking from home.

Over the last year, there have been a number of pandemic food and drink fads that went viral, as people spent more time at home looking for ways to occupy themselves. Half of those surveyed (55%) partook in at least one quarantine-fad food, with banana bread topping the list.

These trends were primarily driven by social media - with at-home-chefs showing off their creations. As younger generations spend more time with this type of media, nearly 70 percent of those 18-29 tried a quarantine food fad; just 27 percent of those 60+ did the same.

“While much of our time in the kitchen this past year was done out of necessity vs. desire, it’s clear from these results that acquiring new skills does drive people to want to cook more,” continued Rubin. “Building confidence in the kitchen has been at the core of Rouxbe since its inception, and we hope more individuals will seek out learning new skills as we all move forward together.”

About Rouxbe
Rouxbe, the world’s leading online culinary school, was founded in 2005 to train people of all abilities to become better, more confident — even healthier — cooks in kitchens around the world. With high definition videos, world-class instructors, peer support and interactive assignments, Rouxbe has set the bar as the new standard in culinary education; providing certificate-level instruction not only to quality restaurants and hospitality organizations but also to serious home cooks and career changers. Rouxbe’s revolutionary online platform delivers cutting edge e-learning solutions that drive and measure learning outcomes and engagement while providing effective, lower-cost alternatives for training professional cooks. Rouxbe programs are also recognized by both the American Culinary Federation Education Foundation and by WorldChefs as approved training programs.