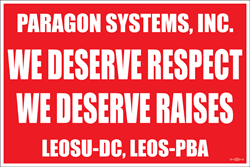 Much to their surprise Paragon was not willing to give the protective service officers working at GSA ROB building a raise this year.

Within an hour of the news the Paragon protective service officers working at GSA ROB, reacted to the statement and Paragon's no raise position by calling for a call to action.

What happened next was a total of 18 officers called off work the next day in a show of solidarity.

While the law protects employees in regards Protected Concerted Activity, Paragon decided to take action against its officers by informing certain individuals not to report to work until further notice.

The LEOSU-DC immediately took action against Paragon by filing federal charges with the NLRB and sending out a mass email to GSA top officials from all around the country notifying them of the Unions intention to call a strike at GSA ROB building. Within hours of this mass email, the GSA ROB Paragon officers started to receive phone calls to return to work immediately.

The LEOSU-DC is now planning a walkout and informational picketing at the GSA ROB location sometime next week. In addition the Union is planning informational picketing at several other GSA and Homeland Security sites around DC & 26 Federal Plaza in New York where Paragon provides security services noted LEOSU-DC organizing Director Steve Maritas " As Martin Luther king Jr. once said "Injustice Anywhere is a Threat to Justice Everywhere.