Los Angeles-based parody band, specializing in folk, bluegrass and classic country music, has developed a new online home for their world-class comedy musical act. The website, which went live on April 30th, reflects the band’s message to "keep on the funny side of life". 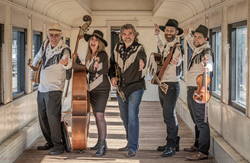 As the band ventures into regional fairs and music festivals, we want promoters and audiences to expect a phenomenal, fun and memorable live performance that reminds them to always keep on the funny side of life.

Tongue-In-Creek, the Los Angeles-based country-bluegrass parody band that raised eyebrows and laughs in 2019 with their viral video “Man of Constant Borrow”, has released a new website. According to a band spokesperson, “the new site better reflects the balance between our funny and silly songs, and our commitment to expert musicianship.”

“I’ve always admired Weird Al Yankovic and his ability to make an audience laugh, while delivering a high caliber live performance,” stated Lynn Shipley, bassist and lyricist of the band. “He was my inspiration to create a country-bluegrass band that stands out from the rest by focusing on comedy, parody and tight vocal harmonies and instrumentals.”

The website provides a sneak peek at the artwork and concept for the band’s forthcoming and highly anticipated CD “American Slapstick”.

Formed in 2019, the band, anchored by the talent of multi-instrumentalist and preeminent folk and bluegrass artist, Fred Sokolow, sold out their first show at McCabes in Santa Monica. They followed up with a second sold out show at Bob Stane’s Coffee Gallery Backstage in Altadena, CA.

Stane, the legendary folk music and comedy promoter, and former owner of the Upper Cellar in San Diego and the Ice House in Pasadena, said, “This is a smart, witty band that produces music and humor that hits the funny bone and strikes a nerve with superb musicianship and hilariously catchy hooks.”

Aside from Shipley and Sokolow, the band consists of Bill Birrell on mandolin, Randall Sommer on guitar and banjo and Alexander Martin on fiddle.

“We wanted our website to capture the silly, fun spirit of the band and our parody songs,” said Shipley. “As we venture into regional fairs and music festivals, we want promoters and audiences to expect a phenomenal and memorable live performance that reminds them to always keep on the funny side of life.”

View the website and book the band at https://www.tongueincreek.com.