Part-Time Work by Choice is On the Rise: New Express Survey Asks Why

Part-time work is on the the rise, and an Express Employment Professionals survey reveals that frequently, it's by choice. 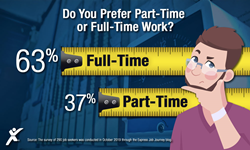 "Our economy and country will be better off when as many Americans as possible can be part of the workforce. That will mean providing enough flexibility so they can work the hours they need while living the lives they want." - Express CEO Bill Stoller

Since the Great Recession, the number of Americans working part-time for economic reasons—such as the lack of full-time opportunities—has declined by more than 50 percent, from more than 9 million to less than 4.5 million. At the same time, the number of Americans working part-time for non-economic reasons—such as child care or semi-retirement—has risen steadily from around 18 million to more than 21.5 million. (Source: Bureau of Labor Statistics)

In a recent survey, Express Employment Professionals polled job seekers about whether they preferred full-time (63%) or part-time work (37%). Those who preferred part-time work were asked to give specific reasons. Given the trends over the last decade, it is unsurprising that virtually all responses cited non-economic reasons:

Terri Greeno, an Express franchise owner in Crystal Lake, Illinois, says that the most preferred part-time schedule is one that “enables parents to drop off and/or pick up their kids from school.”

She also notes that part-time work is a good option for baby boomers who are ready to transition out of the workforce but still want to stay busy and earn some money.

“Many people would like to continue to work part-time while they collect Social Security,” she explained.

This can be a win-win for baby boomers and employers, who are already struggling to find and train talent.

“It’s better to have the boomers’ experience and wisdom on a part-time basis than not at all,” Greeno added.

Yvonne Rockwell, an Express franchise owner in Santa Clarita, California, says that employers should embrace this opportunity to offer flexibility.

“The days of ‘full-time or nothing’ are in the past,” she said. “Employers need to flex with the market in terms of maintaining their competitive edge. Employers need to ask themselves, ‘Why not?’ versus saying, ‘We won’t,’ and ‘We can’t’ or ‘We have never.’”

Janis Petrini, an Express franchise owner in Grand Rapids, Michigan, says a boomer working part-time in a mentoring capacity can be valuable, “especially in skilled positions where they really need the expertise of the boomers.”

“Choosing part-time work is an empowering decision for so many Americans, but for some, it’s not a choice—they’d rather work more,” said Bill Stoller, CEO of Express. “Our economy and country will be better off when as many Americans as possible can be part of the workforce. That will mean providing enough flexibility so they can work the hours they need while living the lives they want.”