The National Fire Protection Association (NFPA) reports that a death happens in three out of every five fires in homes that do not have an alarm. Hansen Enterprises of Paso Robles has recently published a report to help residents and business owners choose the right smoke and carbon monoxide alarms. 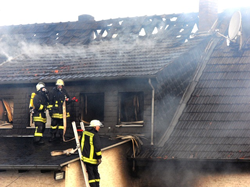 The National Fire Protection Association (NFPA) reports that a death happens in three out of every five fires in homes that do not have an alarm. Hansen Enterprises of Paso Robles has recently published a report to help residents and business owners choose the right smoke and carbon monoxide alarms.

Not only are smoke and carbon monoxide (CO) alarms good safety common sense they are required by the State of California. California law requires that CO alarms and smoke alarms be installed outside each separate sleeping area in the immediate vicinity of the bedrooms on every level of the home, including basements. Smoke alarms are also required on every floor regardless of whether there is a bedroom. The NFPA also recommends that all alarms be interconnected as an additional safety feature. If an alarm detects smoke in one area of the home, all of the alarms ring and notify the entire household to evacuate.

A combination CO and fire alarm is an option rather than buying and installing separate CO and fire alarms. Smoke alarms, fire alarms and now CO alarms, are terms that are often used interchangeably, even though they detect entirely different substances.

Fire/smoke alarms work by detecting heat or smoke. CO alarms work by detecting a certain amount of carbon monoxide. A combination detector detects heat, smoke and CO without needing to install separate detectors. The fire alarm experts at Paso Robles’ Hansen Enterprises are ready to help anyone choose the right detectors and connect the entire alarm system for the best protection.

Because it is odorless, colorless and tasteless, carbon monoxide is known as the “silent killer.” It is a gas that comes from the incomplete burning of fuel including gasoline, wood, propane, or natural gas. Without enough ventilation, CO can build to deadly levels and it doesn’t take much. Even small gas-powered tools can make the operator sick when operated without proper ventilation.

The Center for Disease Control reports that at least 430 people die every year from accidental CO poisoning and approximately 50,000 per year visit the ER due to accidental CO poisoning. Inhaling smoke can be just as deadly as inhaling CO. In fact, smoke contains CO, along with other chemicals that can be toxic.

Smoke detectors work by detecting smoke with either ionization or photoelectric technology. Ionization smoke alarms contain a small amount of radioactive material that creates an ionization chamber between two electrically charged plates. When smoke enters the chamber it disturbs the ionization process and triggers the alarm.

There are a variety of options for getting the best protection and a free consultation and estimate from Hansen Enterprises is going to answer any questions as well as provide a solid understanding of which combination of protection is best for your home and how it’s going to work.